Sparks rookie forward Nnemkadi Ogwumike lead her team to an 86-77 victory over the Sky with a career-high 30 points. She also had 11 rebounds, and Delisha Milton-Jones added 19 points. Swin Cash exploded in the second half for Chicago and finished with 23 points.

My game photos, which include these: 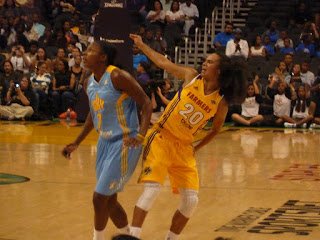 Kristi Toliver’s new found MVP candidate status comes at a price: she was double-teamed all night in this game, but managed her to get off a shot. 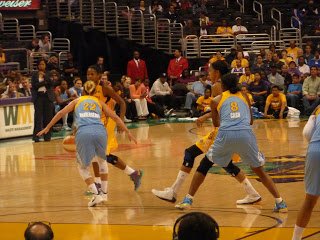 “She played tremendous. Her energy was super, and she kept battling in the paint. She created a lot of plays being aggressive. She was clearly the ‘sparkiest’ of the Sparks tonight.”

On game without Sylvia Fowles in the lineup…

“No, they just beat Minnesota and Connecticut without big Syl. They are a very good team, they actually move the ball a little bit better without her, and I think that they’ve proven they’re not just the big Syl show.”

“Everybody’s game plan is to stop her. That’s fine, because then you get great performances out of Nneka, DeLisha, or somebody else. That’s the good thing about being a team. You don’t always have to be front and center, throwing up big numbers; there’s other ways to contribute and she found those ways tonight.”

On plan after tough third quarter…

“I think that we just keep each other focused. Obviously there were some lapses in the third quarter, but Coach Ross really fired us up, and Alana got us fired up too, saying we need to practice what we preach. Our third quarters have been weak, but I think we did better at maintaining control tonight.”

Winning at home after a tough road trip…

“The road trip wasn’t easy, so it’s great that we got this win, and hopefully it will roll over in the next three games.”

“It was still tough inside. Swin Cash played great defense, so it’s tough no matter what. They have a lot of other threats as well.”

On teams game plan double-teaming her…

“I’ll take it as a compliment that teams are throwing 3 or 4 different people at me at a time. Right now it’s about mental toughness. I’ll be fine, I’ll get through it. I have teammates who can make plays and have my back.”

About playing catch up after the first quarter…

“It was that first quarter, 27-18. It’s difficult to beat anybody when you give up 27 points. We gave them a lot of momentum, they were in attack mode, and we were always climbing back.”

On the absence of Sylvia Fowles…

“She’s a tremendous player, both on the defensive end and offensively. But we’ve gotten over the fact that she’s not going to be with us and we’ve had to play Connecticut a couple of times without her, Minnesota, and now L.A. We’ve played a little bit of a different way, a little more jumpers, a little bit more attack the basket and kick. It’s just the nature of sports in terms of injuries, but yes, it does impact you, especially with the bigs they had here tonight.”

“She’s a tremendous player. She’s got those volleyball hops. She is quick off her feet. She runs the floor, she gets 10 from the line, she gets six on the put-back, she gets four because she can jump over somebody. She’s not a rookie anymore, and she has some good, savvy vets around her.”

On shooting five for nine from the three point line…

“We were doing a good job of penetrating. They were in rotation and I had a good rhythm and just took the open shot.”

On the absence of Sylvia Fowles

“They scored a lot of points in the paint. We have to protect inside and make them take more outside shots. But they’re a really big team. We have what it takes in this locker room. We understand that and we’ll just go back to the drawing board and get ready for Sunday.”

Briann January leads the Fever into the playoffs, and Glory Johnson leads the Shock by example, Dishin & Swishin finds.

Tina Charles talks about the call that changed her life.

Michigan State ballers Kiana Johnson and Akyah Taylor have been suspended for the first nine games of the season for “receipt of extra benefits.” Coach Suzy Merchant said the two are ”good student-athletes that made a bad decision this summer.”

TCU Coach Jeff Mittie’s contract has been extended for an undisclosed length of time.

Peering into the year

Records are only there to be broken