Summitt never had a losing record and never had a scandal. Every Lady Vol who completed her eligibility at Tennessee also graduated, and 74 of Summitt’s former players, assistants, and graduate assistants are currently coaching basketball.

Career at a glance.

Lawson’s tribute video (get out a tissue).

She has raised awareness about Alzheimer’s Disease.

All the links you could ever need.

ESPN Classic is having a marathon of Tennessee gamecasts today and tomorrow. 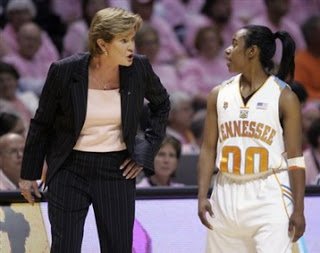 This picture is from February, 2008. The moment is played in full in the University of Tennessee’s championship year video for that season. Shannon Bobbitt received a technical for running her mouth, and Pat didn’t hear the call. She asked the ref to explain, and he stepped to her left side and began telling her what had happened. He hadn’t finished his explanation before Pat, with “the look” on her face, turned and screamed, “SHANNON!!” The ref stopped talking, looked to the side slightly with an “oh sh*t” expression, and walked away. In the meantime, Bobbitt came toward her coach saying repeatedly, “rebound, rebound, rebound” (something that Lady Vols say to show they will take the criticism and learn from it). The above picture is Pat chewing Bobbitt out for the incident.

That’s the coaching side of Pat that we will fondly remember, and for whom we will be eternally grateful.