What could have turned into a rout became an exciting game in the second half, as St. Bernard rallied to beat #5 Windward, but came up short as the hosts won, 59-52.

Windward didn’t heat up until just under two minutes to go in the first quarter, when they went on a 9-4 run to close out the period ahead 17-8. The second quarter was all Windward, as St. Bernard kept missing close shots – several under the basket. The hosts used full-court, pressure defense and two of their best weapons – Courtney Jaco (12.6 ppg) and Jordin Canada (11 ppg) – to make the difference. At the half, it was 31-19.

St. Bernard surged midway through the third quarter and cut the deficit to 31-35 with about three minutes left, but Windward center Imani Stafford swished a shot to put the lead back to six. Demoria White answered back for St. Bernard, but Windward answered in turn with two consecutive buckets and a Stafford block. They lead 42-35 at the end of three.

The last period saw the hosts go up by 11, their biggest lead. St. Bernard again clawed back, but this time could cut it only to seven, two times. Lajahna Drummer, Michelle Curry and Chyanne Butler came up especially strong for the visiting team.

– St. Bernard was fearless, and they never gave up. They also never were intimidated by their nationally-ranked opponents; they just kept driving to the basket and trying to grab every rebound – even against Stafford, who is 6-foot-6. They are fiesty…..and also young, which is scary for their future opponents. They need to learn to finish shots, and they could be ranked too. Seriously.

– Imani Stafford should be dominating games. Tonight she missed shots under the basket, she shot free throws completely uninspired, and she was a fouling machine. Her whole demeanor wasn’t one of urgency whatsoever, which is what it should be in a playoff game. She even got crossed over once in the first half, and fell to the floor (took forever to get up, too). Stafford looks like she has relied on her height in playing basketball for a very long time. There’s no reason someone as tall as she is averaged less than 10 points per game during the regular season.

– The refs called fouls against St. Bernard to the tune of 10-2 in the second half. The parents were about to go nuts with rage. Then Windward scored those two buckets in a row, and some of their parents turned and mocked the St. Bernard parents. I thought it was going to get ugly for a second, but then all of that just fell away. Thank goodness, because the game was physical enough without having to worry about anything else.

– Division I coaches in attendance: Arizona’s Niya Butts, Michael Cooper I and II of USC, and Tony Newnam from UCLA.

– The intensity of the game was palpable. It’s why I love high school ball.

Windward moves on to face their next opponent, Serra, sometime next week (brackets will be drawn Monday).

Apologies for the few and poor quality photos. The lighting in the Windward gym wasn’t working for my camera. 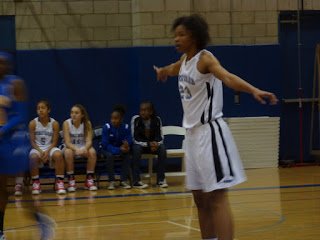 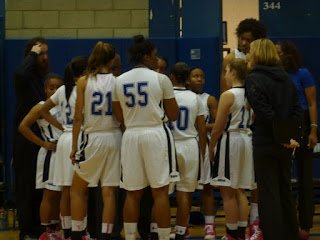 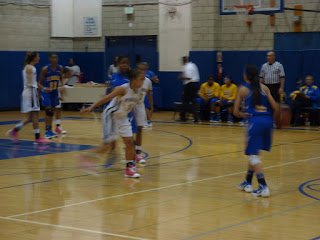 St. Bernard’s had a few players taking turns at the point position 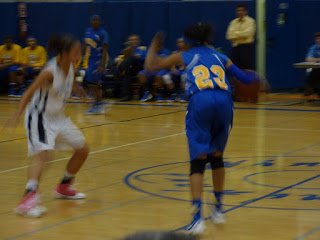 Match up results that never cease to surprise

Collier’s unique Rookie of the Year race was all in the...