Full photo gallery – check it out! 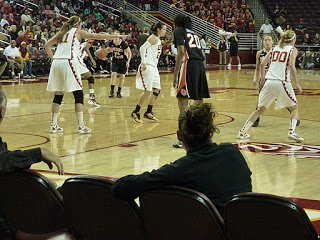 – Jacki Gemelos, who had surgery Jan. 17 to repair her torn left ACL, returned to Galen Center for Saturday’s game to cheer on her teammates. She came in on crutches and sat beside the team bench. Gemelos went into the locker room with the Trojans both at halftime, and after the game.

– A lively crowd of 1,803 was on hand for the contest. The excuse that Los Angeles residents don’t attend women’s basketball games because there are too many things to do in the city is untrue in Troy. A big crowd almost always shows up for weekend games, and they are loud, too. Several kids wait outside after the game for players to come out and sign autographs.

– Lisa Leslie and several other former USC players were recognized at halftime. Leslie became like the Pied Piper as she walked around the arena, attracting groups of kids wherever she went. At one point she stopped to give Gemelos a hug. When she turned to leave, she found herself surrounded by children who had spied her, ran over and lined up to talk to her. Leslie took time out to sign autographs for them.

– Oregon State is a very well-coached team. Coach Scott Rueck has done an admirable job of schooling players in the fundamentals; they don’t miss many buckets, wherever they are. The team’s outside shooting is exceptional. Not many are looking to Oregon State for anything in the Pac-12 over the next few years, but they will be surprised. The Beavers are going to sneak up on everyone.

– It was unfortunate to see how upset USC players were after the game. Not only did they feel the win should have been a “give me,” but they wanted to take the victory for Gemelos.

Sparks beat Storm in the battle of short-handed teams