You can see it in teams across the country, whether they’re bigger schools or mid-majors: this year’s freshmen class is making waves. ESPNW agrees. Their top five are: 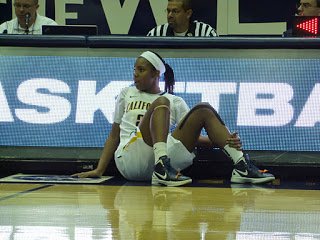 Cal freshman forward Reshanda Gray waits to check into last Saturday’s game against Oregon. Gray leads the team in scoring and is third in rebounds.

ESPN recaps what fans have learned so far this season, and it’s an interesting list. I am more intrigued by the “five things we already suspected” list:

3. It’s a young woman’s world out there: There are some notable exceptions — Stanford’s Nnemkadi Ogwumike, Delaware’s Elena Delle Donne, Ohio State’s Samantha Prahalis and Tennessee’s Shekinna Stricklen among them. But senior stars are usually the rule in women’s college basketball, not the exception. For whatever reason, and we don’t have early entry to blame on this side of the college game, this season’s senior class lacks oomph at the top of the sport. Senior stars such as Missouri State’s Casey Garrison, VCU’s Courtney Hurt, Eastern Michigan’s Tavelyn James and Gonzaga’s Katelan Redmon are wrapping up special careers out of the spotlight, but it looks like the players who have the most to say about what happens at the Final Four in Denver will be around for at least one more season. Of the teams in the first Top 25 of the calendar year 2012, only 10 were led in scoring by seniors.

And the “revision of conventional wisdom” list…..no player of the year, and the title is up for grabs. True that.

Finally, there is
trouble for Duke, as sophomore guard Chloe Wells will miss the remainder of the season due to a violation of university policy.

A non-game day can’t stop the news from flowing