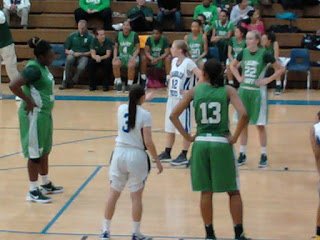 The homey IM in OC is in Arizona right now, taking in the USC Pac-12 games and some high school action. Here is his report:

USC did not make a basket in the final 5:45 of the game, but did make eight of 11 free throws to beat ASU by 12. The Sun Devils only hit two baskets in the last 8:50 of the game, and missed seven of their last 10 charity shots. ASU had no players with double-digit scoring, and no player made more than three field goals in the game. Kimberly Brandon had three field goals and two of those came in the last 8:50 of the game. She scored her team’s last buckets.

ASU had big trouble with the USC press in the second half, as there was no Dymond Simon to help this year. Promise Amukamara ran into a blind screen set by Cassie Harberts of USC. Last season Simon ran into the same type of blind sceen, and missed several games with a concussion. You would think someone on the court or on ASU’s bench would yell it out to their teammates. USC walk on Dominque Scott (Pasadena CC) made her first appearance for USC with 1:42 left in the first half.

Former Trojan Kari LaPlante (class of 2011) was at the game to root for her former teammates. LaPlante currently plays for Alexandria, in Romania and was home for the holiday break.

St. Marys is the number one high school team in the nation, according to ESPN Rise. Tonight they faced off against Chandler High School, which is #5 in Arizona. Both teams have players going on to the next level. St. Marys has Shilpa Tummala, who verballed to Harvard in 2013. Also on St. Marys is a freshman guard Courtney Erkmark. She scored 27 points in the contest and has nearly all the skills that you would expect a high school senior to have. I believe she is the daughter of St. Marys coach Curtis Erkmark. Cortnee Walton (2013) is going to Louisville, and she also played a strong game.

Chandler has senior Simone Westbrook going to Arizona. Je Zhe Newton is highly-ranked, but didnt dress for some reason. Chandler also has an outstanding point guard in Dezirae Ellis; she hustles all over the place. She can go to the hoop, shoot the three and she can pass as well as anyone I have seen recently in the high school game. She had around 25 points tonight, and was the spark plug for the Chandler team all night. If she hasnt been signed by someone, she is a senior, she is a steal, She is only 5’1″ but plays big for her size.

There is no shot clock in Arizona high school games. UCLA coach Cori Close was at the game scouting some of the players, and spoke to both coaches after the game.

On to Tuscon on Saturday for the USC vs. Arizona game 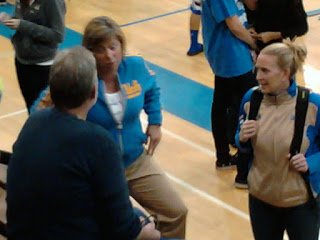 UCLA Coach Cori Close talks with a parent after the game. 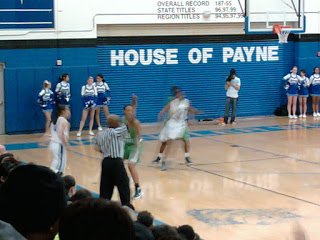 Chandler’s gym is called the “House of Payne,” and IM in OC didn’t find out why that is. 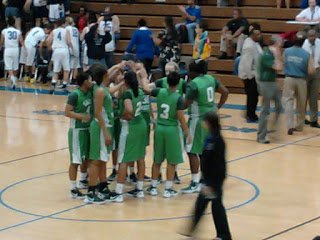 All pictures by IM in OC.

What it takes to win a state title