Home Uncategorized University of Oregon’s Matthew Knight Arena: you be the judge 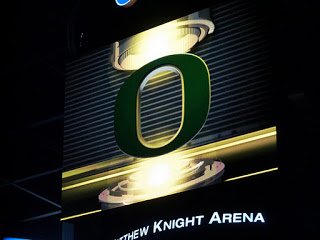 The modern-day symbol for the University of Oregon…..this old schooler doesn’t like it.

This past weekend I finally got to check out the University of Oregon’s new basketball/volleyball court, Matthew Knight Arena. I had been curious about the new venue, which took the place of 90-year-old McArthur Court last January.

It’s all it’s cracked up to be. Knight Arena is soundly and beautifully-designed in a way that makes sense – much more so than Galen Center in Los Angeles, which gives up a lot of seating for a big window on the north side. Knight also has a huge video screen, two stats boards, and a Staples Center feel to it. But what do you expect from Nike co-founder and Chairman Phil Knight, who was the major donor to the $227 million project?

The court has been a matter of debate. It’s called “the woods” because silhouettes of fir trees line each side under the baskets. Some say the darker paint is a distraction, because it makes the floor look too busy. I’m curious to know what readers think; take a look at the pictures and post your comments.

Mac Court was where I learned to love women’s basketball. But as for Knight Arena, I don’t have an opinion, personally. I’m kind of conflicted in my feelings about my alma mater’s athletic department anyway.

Since the early 1970’s, when Steve Prefontaine was a Duck, Oregon had been a track and field school, and to a lesser extent, a basketball school. The symbol was a fighting duck bursting through a sideways “O.” Somewhere in the 90’s, long after I had left town, the U of O somehow got to be a football school. Autzen Stadium is nothing like it was back in the day, when my high school would play there Friday nights, and where we all went for fireworks on the Fourth of July. Now it’s a monstrous series of complexes, including the stadium. Atop it all is a huge “O.” (See above photo) In fact, the modern-day “O” is everywhere in town, to the point of obsession.

It’s nothing different than the displays seen in the South, where football has long been a type of religion for sports fans. But Oregon’s football fervor doesn’t seem as naturally-evolved as the SEC’s. And all the corporate money in the world will never make me think of it as a football school.

I guess the Ducks did need a new basketball arena; Mac Court was getting old. And there’s nothing to complain about in Knight Arena, except for the curious fact that they don’t give game programs to fans. And I am indeed glad that Phil Knight wanted to give something back to basketball and not just focus on football.

Listening to some of the fans in the stands at last Sunday’s Oregon-Portland State game, I get the impression that their main issue is on whether or not the Ducks need new coaches again. But that’s another column. 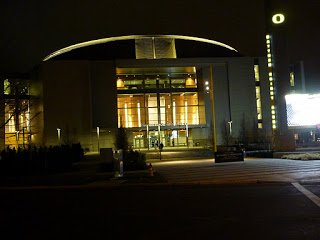 Approaching Matt Knight Arena. The arena is named after Nike executive Phil Knight’s son, who died in a scuba diving accident at age 34. 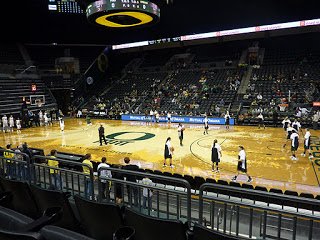 The view of the floor. 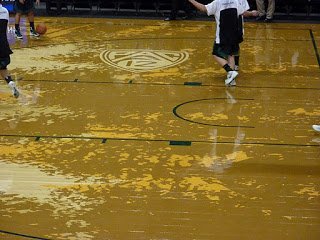 Each side of the court is painted with fir trees, which has caused some to ask whether or not the floor design is a distraction. 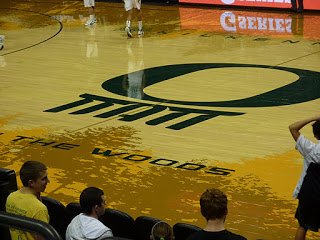 The middle of the floor. It’s named after former Athletic Director Pat Kilkenny, and you can see “Kilkenny” at the top of the photo. 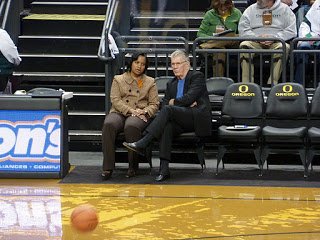 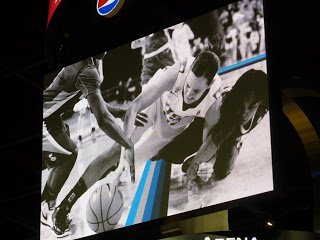 The video montage that plays before player intros includes many action shots. 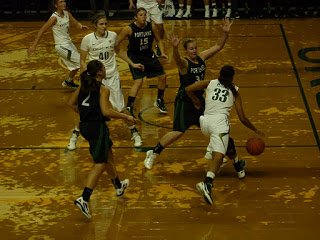 Freshman Lexi Petersen drives to the hoop in the second half against PSU, which demonstrates how the floor appears to players. 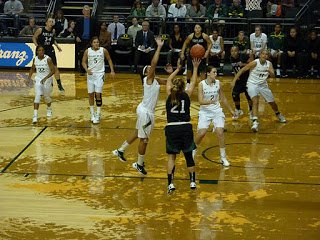 PSU’s Eryn Jones shoots in the first half. 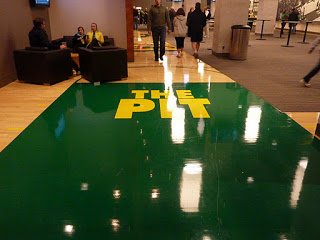 The Knight lounge downstairs is generally only for “VIP”s, but it was open last Sunday night, so one of my friends and I went to look. Part of the floor is the old floor from Mac Court. 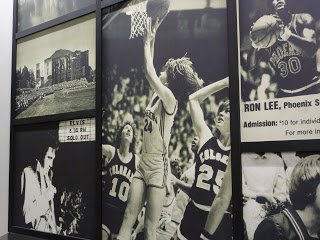 Photos adorn the back walls, including one of Duck legend Bev Smith. 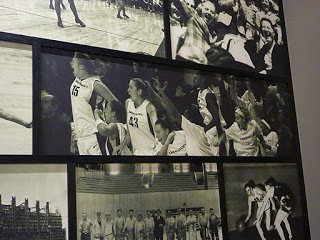 Not sure when this was taken, but my guess is the 2002 WNIT championship.

Response to Westbrook appeal is a reminder to maintain perspective