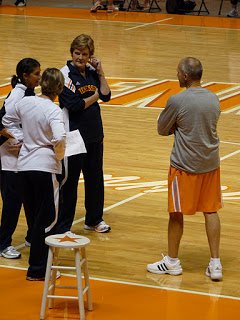 SF: This team has got a little bit of everything: Vicki Baugh, who is a holdover from the Candace Parker/Nicky Anosike era; the heralded freshman class of 2008; last year’s superstar freshmen; powerful newcomers this season. How is that all blending together?

MC: The early indications are very good. Vicki Baugh is both a respected leader and beloved by her teammates. And, as noted, she is the last player connection to a Final Four. They know she knows what it takes to get there, so she has everyone’s ear. Baugh also is one of the hardest-working players on the team. Coaches love it when one of the best players is also one of the hardest-working – much like Candace Parker was – because it sends the message that there are no shortcuts to greatness.

Another senior who doesn’t get much attention but who deserves a shout-out is Briana Bass. She could have gotten discouraged during her time on campus, but instead she has become a team-oriented player who works hard every single day, has stepped up to help Ariel Massengale, and before that, Meighan Simmons, even though it meant they played over her at the point position. Players like that are so beneficial because they could be a detriment to team chemistry and turn out to be an asset.

All the returning players have shown a willingness to help the newcomers make the adjustment on the court to college basketball.

It might have been tricky to mesh a freshman point guard with a veteran team, but two things have facilitated that process: Ariel Massengale is no ordinary freshman, and the seniors have yet to make a Final Four in their careers. They realize they need everyone on the roster to fulfill their dreams.

It is a small roster with just 11 players, and junior guard Kamiko Williams remains out while she rehabs an ACL injury. But even Williams is finding a way to contribute. Williams had never been asked to play a possession of defense in her career until she arrived at Tennessee and it was a huge adjustment to her. For some insightful viewing, watch the bench during the Nov. 15 televised game against Miami when Tennessee is playing defense on that end of the court. Williams is up pointing to get people in the position and screaming for players to get their hands up. She sounds like Pat Summitt on the sideline. Just call her Coach Williams.

SF: At SEC Media Day, Pat Summitt and Holly Warlick commented that Baugh looks like the player they signed five years ago. Why do you think they said that? How does Baugh look different this year?

MC: Baugh is as healthy as she has been since her freshman year so that would explain the coaches’ enthusiasm. She is back to running the floor like a guard as she did pre-ACL injuries, and she has added strength and transformed herself physically.

Baugh will need time. With the limitations of the thrice-operated knee (two ACL repairs and a meniscus surgery), she has essentially been off the court for three years. So it will be an adjustment to get into the flow of the game and learn a new position. She has always played facing the basket and is used to operating in space. Tennessee will need her to post up and play the center spot with her back to the basket in some sets.

The offense is predicated on spacing, cuts and screens and Baugh’s mobility will be a big asset, but she needs time to get up to speed with her game and get used to playing with her teammates.

SF: Baugh is the elder stateswoman of the team. Do players listen to her?

MC: It is not an exaggeration to say she is revered. Her attitude, her sense of humor, her work ethic, her resume – it all adds up to a teammate that is truly beloved. They also know she got it done in the postseason of 2008 – that was Baugh’s breakout period –and she is the only player with a national title ring.

Freshman Isabelle Harrison is now known as Mini Me Izzy because she does what Baugh does and listens to her. In my opinion, Harrison is an excellent judge of character to have selected Baugh as the person to emulate. Candace Parker and Vicki Baugh still talk on a regular basis, as do Baugh and Nicky Anosike. Those two also endorse Baugh as a player and a person. She is special, no doubt about it.

SF: Glory Johnson was so strong last season. How does she look this year?

MC: Johnson has been a workhorse for the Lady Vols. Through all the post injuries of the past three seasons, Johnson had answered the bell for every game. She has gone from relying on sheer athleticism as a freshman to becoming a basketball player as a senior. She is listed as 6’3 but is closer to 6’2 and of slender build – though as you noted she is extremely strong – but has battled bigger posts throughout her career.

A nice development of her game is being able to hit that baseline mid-range shot from the short corners and the elbow jumper near the free throw line. She is explosive to the rim so that will force defenders to get out on her, thus opening driving lanes.

She is also outstanding on the boards, especially the offensive end, with her leaping ability, and she is difficult to box out because of her strength. She gets battered inside and just keeps battling.

SF: What has Meighan Simmons done to grow her game since her incredible freshman debut last year?

MC: The best thing to happen to Simmons is the arrival of Ariel Massengale. Simmons will have to be ready at the point spot, but it will be in relief. She can now play her natural position of shooting guard, and defenses will have to account for Massengale, Shekinna Stricklen, Taber Spani and Meighan Simmons on the perimeter. Somebody will get open.

The next step for Simmons is her court awareness on offense and defense, and she has demonstrated a willingness to listen to the coaches. That is a vital step for any player. Simmons had a lot on her plate last season as she tried to run the team at the point, a position she had not played. Now, she can work on getting better at her position of shooting guard and becoming a stout defender. Her aggressive attitude and passion for the game will be beneficial as she takes her game to another level.

SF: What are each of the freshmen bringing to the Lady Vols program?

MC: Ariel Massengale is the most college-ready player I have seen for Tennessee since Candace Parker. She missed nearly all of October with a concussion, plays with her teammates in a game situation for the first time in the exhibition game and looks comfortable nonetheless. She understands the game in ways that have been taught – her father had a huge influence – since she was a youngster.

Pat Summitt surprised people when she announced that Massengale was her starting point when she was still in high school. Summitt had the benefit of having seen Massengale play. Now, we all know what Summitt saw.

Cierra Burdick will be a difference maker at Tennessee during her career. She is athletic, handles the ball well, already has a midrange game – she shoots very well off the dribble – and has a work ethic that is uncommon for a freshman. Like any freshman, she will have to learn defensive concepts and become a better one-on-one defender, but she played in USA Basketball systems so her learning curve is not as steep. Tennessee will want her to be able to play at the three and four spots, so we will need to add a consistent three-ball to her repertoire, and it has already improved from September to November with repetitions, so it’s doable.

Isabelle Harrison has been a pleasant surprise for the staff, because of her work ethic. She gets in extra repetitions on a regular basis and has shown touch around the rim and the aptitude to take instruction in a drill and apply it to game situations. She also has a solid midrange game that is so vital for posts because she can step out of the paint and hit a shot, thus drawing a defender with her. She will have to get stronger for the college game, but she arrived last summer just for that reason so there is no doubt she will make the commitment.

SF: What are the strengths of the team so far? What are some things they are working on?

MC: This is a veteran team so that always helps because they have vast experience in all types of game situations. It is also a close-knit crew that remains very tight off the court. The next step is to hold each other accountable on the court, something that the senior Baugh will do, and at the other end of the roster, the freshman Massengale.

They no longer have the size at the post that they did in past seasons, but they do have more mobility, so they will become more active on defense and be able to extend it to the full court.

They also have the chance to be an outstanding shooting team, especially from behind the arc, with Spani, Stricklen, Bass, Massengale and Simmons all being capable of hitting the trey.

A weakness last season was the overall free throw shooting, but that has shown some signs of getting better. Burdick and Massengale are already solid from the line, and Harrison is working on being more consistent from the stripe. Baugh is an excellent free throw shooter and since she plays in the paint that is good because she will draw fouls. It also is something Johnson has spent time on, which is important because she will draw a lot of fouls. Alicia Manning has a knack for being around the ball and getting fouled, and she is a very good free throw shooter.

They also are better at handling ball pressure, a major weakness in recent seasons. That is attributable to Massengale and the speed that Tennessee can put on the floor to beat pressure. Passing and dribbling drills have been an emphasis, too, to focus on reducing turnovers and taking better care of the ball.

SF: Same question as last year: are they getting yet one step closer to capturing the energy of “the old Lady Vols”?

MC: The biggest indicator that they have returned to their roots will be the performance of the defense. Tennessee has been vulnerable on that side of the ball for three seasons – and gotten progressively better each year. The next step is to be able to be the dominant defensive team that Tennessee has been known for – the types of teams that won national titles.

Early signs are good as the staff has demanded excellence on that side of ball, even going so far as to hold a defense-only practice the day before the first exhibition game. The defense will be a season-long development and could be quite a force by the time it really counts – postseason.

These seniors want to get to their first Final Four. They also realize every player on the roster is needed to get them there.

Brittney Griner comes out as being already out

Reshanda “Too Tall” Gray down to two schools