Checked out a few games at the Say No Classic today. The first was the Ocelots vs. the Titans, which is displayed in the first three photos. The Titans have some incredible defense, and the Ocelots couldn’t get past that.

Next up was 2K11 vs. the Eagles. 2K11 looks like an all-Pac-10 team, with a roster that includes former USC Trojans Kari LaPlante and Stefanie Gilbreath, and former Wilcat Ify Ibekwe, who was cut from the Seattle Storm a couple weeks ago. This team looks like a Redwood forest for their height, and they had no trouble putting away their shorter opponents. So far they’ve only lost one game, and that was in overtime.

The only sad thing after the game was seeing Ibekwe walk off in her “Storm basketball” long-sleeved shirt. I was so sad when they cut her.

LA native Tayllor Gipson, of South Idaho College, takes the ball up the floor for her Ocelots, as they played the Titans. 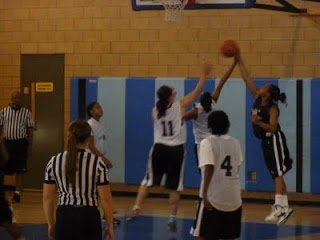 Battling for the rebound in the first half. 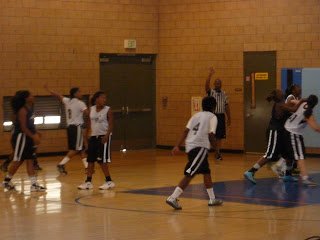 Both teams watch a Titans shot go in during the second half.

2K11 is loaded from left to right: Coach Onye Ibekwe, his sister Ify Ibekwe, and Kari LaPlante. Stefanie Gilbreath is also on the team. 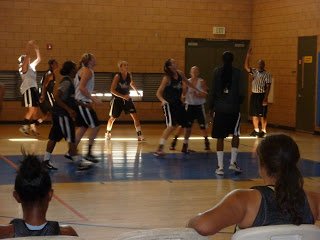 2K11 is an extremely tall team. They played the Eagles (white jerseys). 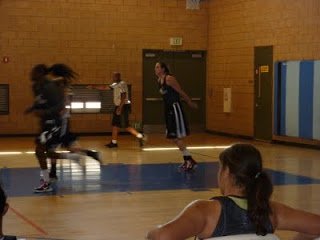 LaPlante gets the board and makes the pass down court, while Ibekwe is already in motion.

While we wait for scores……