Thanks, IM in OC, for the pictures illustrating the intense atmosphere at the WNIT championship game today. Bless the hearts of the USC Trojans for staying competitive in an environment like that. And that picture of Kari LaPlante breaks my heart.

There’s NOTHING to hang your head at in playing a championship game, ladies! Be proud of yourselves, because I sure am. 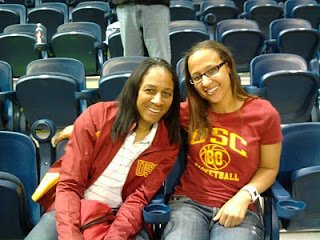 Melissa Ward(on left) from the 82 championship team and Courthey Robinson(t-shirt) former Trojan team manager were at the game to support the Trojans. Ward is now a commercial airline pilot. 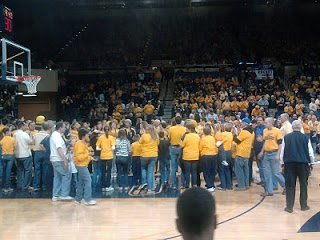 Toledo fans circle the court and the players enter through them before the start. 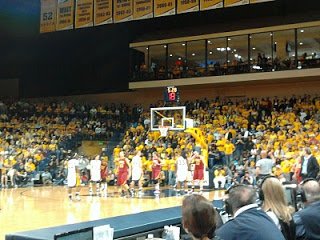 Play goes on, under the far basket, while people watch the game from the restaurant above the arena. 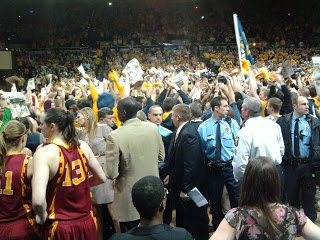 Fans swarmed the court after the victory as the USC Women of Troy went back to their bench. 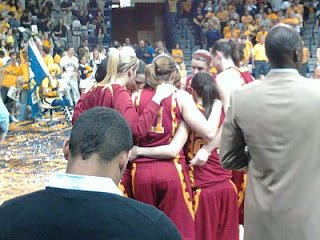 One last huddle for the USC WOT after the game ended. 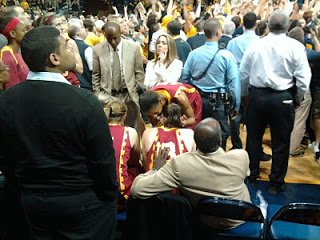 It was a tremendous atmosphere to be at for a college women’s basketball game. I arrived 90 minutes prior to tipoff to find tailgaters in the parking lot, like it was a fall football game.

The Toledo crowd was dressed in gold, and was very supportive. There were 7300+ in attendance, and only about 15 Trojan, fans and parents there to root for the Women of Troy.

The game was competitive, and both sides left everything on the floor. Naama Shafir – #4 for Toledo – played the game of her career, scoring 40 points. Even though the Trojans lost, it was worth the trip and the experience.

After the game about a dozen Toledo fans came up to us in the stands and thanked us for coming and supporting our team. As we walked out almost every fan wished us and the players a safe trip back. I wish the So Cal teams had the support that the Toledo Rocket fans gave to their team.

Lynx take Game 4 to even the series