Today was an emotional and historic day at Pauley Pavilion.

For one thing, it was senior day and time to say goodbye to four athletes who have spent their last three years growing in front of our eyes under Coach Nikki Caldwell: Doreena Campbell, Darxia Morris, Christina Nzekwe and Nina Earl.

It was also the last game day at Pauley Pavilion, which is shutting down until 2012 for remodeling. Attendees were given two rally towels, a Pauley postcard with significant dates on the back, and a “John Wooden pyramid of success” placard. It was pretty dope.

“So much history,” Coach Nikki Caldwell said after the game. She’s said it many times, but it goes with the territory when 30 national championships have been won in the building. Much respect.

The game was UCLA’s typical route, with no disrespect intended towards WSU players, who hustled until the final buzzer. But when the Bruins clamp down on defense, it gets ugly for the other team. For a long stretch towards the end of the first half, the Cougars couldn’t even get the ball out of the back court and up the court for the Bruins’ press.

Caldwell kept the four seniors in – and together – for much of the game. They were honored beforehand, in a ceremony, and were interviewed briefly on Bruin radio afterward. They were definitely given their due respect.

For my own tribute:

I knew Christina Nzekwe as a high school freshman and sophomore in Seattle. I watched her evolve through her playing career and come painfully close to a state championship. I was very pleased when she and Regina Rogers were drafted to UCLA, and even more happy that Christina decided to stay when Regina left.

Christina reminds me of Reshanda “Too Tall” Gray in that, when both of them become famous, they will each still be the same old sweet girl at heart. Christina is still pretty much the same eleven days before her 22nd birthday as she was on her 15th, when she stood by the track at Chief Sealth High School, holding a balloon and smiling.

I loved Doreena Campbell’s game the moment I saw her play. I was also intrigued to hear her talk on the jumbotron, because she sounded like an intellectual. A teacher’s aide at my former school confirmed it. Marv had been a team assistant during Do’s freshman year, and he said it was not uncommon for her to go to the library to study after a game. A brain who could break ankles! I was on board. And I’m going to miss Do.

I’ve only had a chance to talk to Darxia Morris and Nina Earl once, at the UCLA team dinner last October. They were very pleasant. Morris in particular seems to have grown under Caldwell. In her sophomore year – Caldwell’s first – the new coach suspended her for two games for violating team rules. Morris not only never got in trouble again, but she emerged as a team leader and a wicked three-point shooter.

Congrats to all these seniors, and I hope you keep playing somewhere around here so I can go watch you.

The team happily mugged for a photo after the game, while Coach Nikki Caldwell conducts a radio interview. 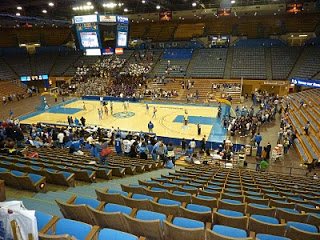 Goodbye, Pauley Pavilion in its historical state. And thanks for the memories.

More great pictures, including some post-game interview shots, are HERE.

Some revelations starting to show

A lil good, a lil not-that-great

Thinking playoffs, and much more

Neighbors puts a reinvented Arkansas back on the map