I gotta go to bed, so this will be brief.

Nice turnout at Galen Center on the USC campus today for the rematch between the Trojans and UCLA. SC fans might have been dismayed, though, because there were more Bruin fans present than those there for the home team. The blue-wearers were loud, too. But for such a historically-heated rivalry, everyone was on their best behavior.

It was an exciting game, especially to start. UCLA was playing their usual “stingy defense,” but USC got into the act too and it seemed to be a press-fest on both sides. The lead changes three times and the score was tied four times in the first half. It wasn’t until the second period that the Bruins began to pull away.

Darxia Morris was hot from the two-point line, going 10-15. She finished with a team-high 24 points. Jasmine Dixon had 23 points and 14 rebounds – a high for her. She has grown her game to now be a threat both inside and outside the paint. It’s exciting to see how much she’s grown, and it bodes well for UCLA; the most dangerous team is the one that’s a threat inside and out.

Jacki Gemelos lead the Trojans with 16 points, bless her knees. Ashley Corral and Cassie Harberts each added 13. I was impressed with Harberts – a freshman.

Fab game pictures can be found HERE, and be sure and go to page two, as I had many photos today.

Bonus picture, from IM in OC: Alexyz Vaioletama of Mater Dei, who will be a freshman next year at USC, talks with Harberts in the lobby after the game. (The team signed autographs for fans). 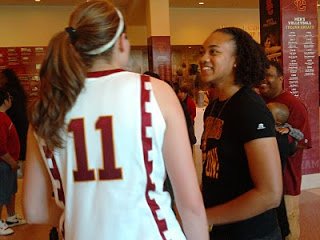 Maryland’s Brionna Jones is WomensHoopsWorld’s player of the week

UConn’s upset is good for the game

In the midst of week two