I went to last night’s game just as much to see Oregon State as to see UCLA.

The Beavers intrigue me. Here’s a program that was stripped down to two players by last summer, and was left for dead. OSU hired Scott Rueck – a 14-year Division III coach who took George Fox to a national title in 2009 – to rebuild. Rueck held open tryouts a few weeks after he arrived, and the group of virtual unknowns formed a team and began to practice.

They won their first three games, and in pre-season overall, the Beavers were 7-4. They haven’t won a Pac-10 game yet, but they’re doing pretty damned well for a group of newbies. Better than anyone expected.

“They have good defense, they transition well, they play team ball, and they really hustle,” he said.

And perhaps what won both of our hearts: “They never stop trying.”

When they’d closed the gap on the Bruins in the last few moments of the game, OSU was hustling. But even when they were behind, the Beavers were still working hard. I’ve seen much better teams play much less inspired than they did.

Rueck and his athletes were candid after the game. Rueck said they lack experience. Sage Indendi, who lead OSU in points last night and is the second-leading scorer on the team, said some of her teammates were intimidated and others were excited.

I think it’s Rueck – all five-foot-four of him (or so it looked to us). He’s obviously a motivator as well as a coach. That’s called a complete coach, and it bodes well for the future of the Beavers.

Their weakness is rebounding, as can be seen in the box score. But OSU out shot UCLA last night, 50-48 percent.

I’ll be keeping my eye on the Beavers, but for now, color me impressed. 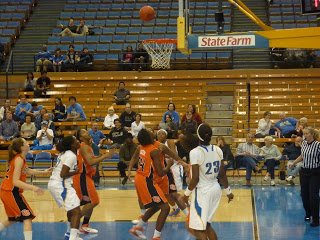 Many upsets, and a fight