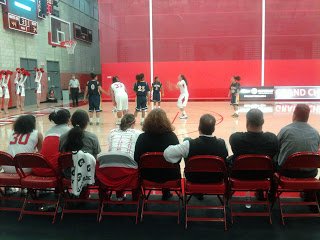 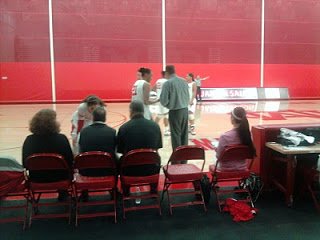 Alexyz Vaioletama and Adams get instructions from Coach Kevin Kiernan. 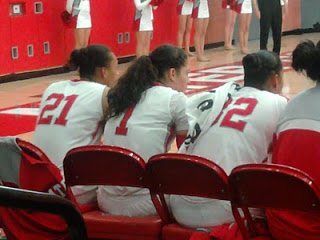 Vaioletama, Adams and Kaleena Mosqueda-Lewis, aka the big three for Mater Dei, watch the last few minutes of the game.

At this point many who have seen MD games would assume it would become another blowout, but SAMO scored 23 points in the second quarter to close the gap at halftime, trailing 29-36. SAMO then scored the first five points of the second half to cut the Monarch’s lead to two, 34-36.

There was a scary moment for with about five minutes left in the third quarter, as Kaleena Mosqueda-Lewis for MD and Moriah Faulk for SAMO crashed into each other near half court. Kaleena hit her head on the floor and Faulk was on the floor for a few minutes with an apparent hip injury. Both were examined by the trainer on hand, but both returned to the game a short time later. Mosqueda-Lewis went down again with some kind of leg or knee injury, but she stayed in the game until the two-minute mark.

And then there were 18