LSU point guard Latear Eason sets up the play in the first half. 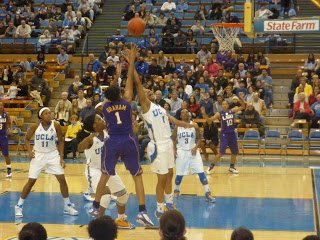 The UCLA Bruins lost for the first time this season Tuesday night, falling to LSU 55-53 in a tight game that went down to the wire.

The Bruins trailed by 5-6 points throughout much of the latter part of the second half, but a Christina Nzekwe jumper with 38 seconds to go tied the game at 53. The Tigers’ Taylor Turnbow hit a jumper at 14 seconds to put her team up by two. On the other end of the court, UCLA missed two shots but had one more chance to score at 2.3 seconds left on an inbounds pass. The ball went to Darxia Morris, who missed the shot as time expired.

Turnbow had a career-high 18 points and 13 rebounds. Morris lead the Bruins with 16 points.

LSU got off to a quick start in the game, reeling off the first seven points and holding UCLA scoreless until just under 17 minutes to go. The Bruins shifted into another gear and tied the game at 11 at the nine-minute mark. They then went on a run and lead by as much as seven for most of the remainder of the half, until the Tigers began to catch up. UCLA lead 25-21 at the half.

The score was knotted at 33 with 15:02 in the second half, and from there it was a battle, with LSU holding the slight edge to maintain a small lead until the Nzekwe two-point shot.

UCLA Coach Nikki Caldwell called it a lack of focus on the Bruins’ part: “You miss layups two feet from the basket, it’s just our lack of focus. You’re always going to struggle offensively when you can’t make layups. This is something that’s plagued this team all season. We’ve been able to do enough on defense to masquerade it.”

The Bruins shot better than the Tigers, but LSU had more rebounds. Box score.

Both UCLA and USC are headed up to Washington this weekend as Pac-10 play begins.

I talked with Van Chancellor, who I’ve always admired, briefly before the game. He said he really likes coaching at LSU and at the college level.

ACC: will a wild ride lead to an unforeseen ending?