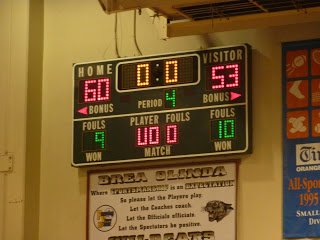 The scoreboard tells the story at the end of the game.

For the first two quarters, it seemed that the much-anticipated matchup between #2 Brea Olinda and #9 Long Beach Poly would be a dud.

After a sloppy, nervous start on the part of both teams, Poly took control of the game behind point guard Ariya Crook-Williams, who had 10 of her game-high 22 points at the end of the first period. The Jackrabbits played smothering, stifling defense to shut Brea out of the key on most possessions. Poly lead 34-26 at halftime.

But the Ladycats came out of the locker room on fire. They went on a 14-0 run that culminated at the 2:03 mark in the third quarter, when Justine Hartman and Keitra Wallace free throws gave the ‘Cats a 40-38 lead – their first since the opening period. A Taylor Spears steal and layup pressed the lead to four, but Poly rallied to tie the score at 44 at the end of three. They were helped in their quest by the fact that Poly starters Sheila Boykin and Destiny King sat for most of the quarter in foul trouble.

Things continued to be tight in the fourth, with the teams trading slight leads, and the score was tied at 51 with 3:21 left. Then the Jackrabbits went ice cold on both shooting and the free throw line. Boykin fouled out. But it was a Spears three-pointer from the left corner that put the ‘Cats up 56-51 at the 1:31 mark, and Poly was never able to recover. Brea stayed strong down the stretch and claimed their first Ladycat Classic tourney win since 2005.

Brea Coach Jeff Sink said the strategy for his team in the first quarter was to set up a three-quarter press and a 2-2-1 zone to force Poly to set up their offense.

Sink said forward Jeanier Olukemi’s foul trouble, which caused her to sit all of the second quarter, aided the Jackrabbits in their run. In the second half, the Ladycats’ goal was to slow the game down.

“Poly was getting second- and third-chance shots,” Sink said. “So we did slow the game down in the third quarter, which made Poly nervous.”

Sink said winning their tournament for the first time in a while doesn’t mean much, because it was about five years ago that he increased the size of the bracket and began inviting higher-level teams.

“It’s too early in the season – no team is going to be up to full speed yet,” he said.