The USC Trojans lost to the Princeton Tigers 60-59 on the opening day of the Vanderbilt Tournament in Nashville, Tenn yesterday. This was a game that USC led for most of the way. Princeton’s last lead was at 21-18 midway throught the first half, but USC failed to put away a team that on a man-to-man basis, they were better than. They also failed to make their free throws, hitting nine for 18 in the game, while Princeton hit 16 for 20. Princeton made their last two free throws to win the game with five seconds remaining, and trailing 59-58. USC’s inbound play was a desperation three-pointer by Jackie Gemelos that didn’t fall. Ashley Corral led all scorers with 21 points, and played the entire 40 minutes. Niveen Rasheed led Princeton with 18 points. 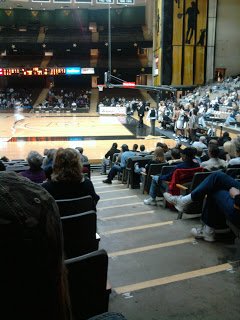 The benches in Vanderbilt are on the baselines, not the sidelines. This was Vanderbilts bench. Vandy beat Quinnepac, 111-53. 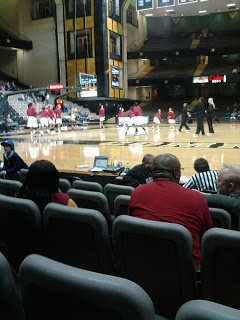 USC warms up for their game against Princeton. 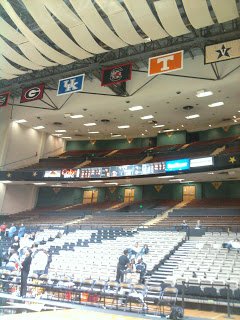 Vanderbilt’s arena is almost a square with three levels. SEC conference flags hang on the ceiling, including Tennessee’s.