LMU used a 21-0 run and 64 percent shooting in the second half to bury Stephen F. Austin in the opening game of the Courtside by Marriott Los Angeles Westside Thanksgiving Classic today.

The game got off to a more even start, as both teams were shooting well and running good transition games. The Lions took an eight-point lead, but the Ladyjacks went on a run and caught up. The same sequence happened twice more, and LMU was up only 47-40 at halftime.

The second half was when they rolled out the can of whoop ass, and it was all down hill for SFA from there.

Junior Alex Cowling lead the Lions with 27 points, and freshman point guard Hazel Rarmirez had a career-high 22 points, to go with five assists.

Both teams are very fundamentally sound, are quick and have great shooters. But LMU appears to have more depth.

Furious boxing out in the first half. 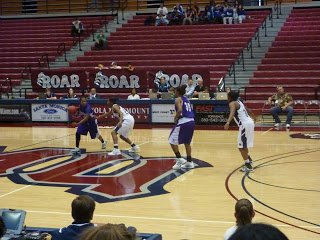 SFA brings it up the court. 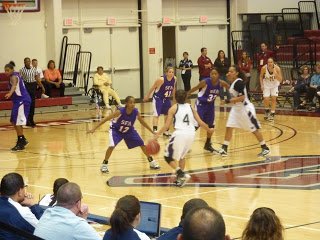 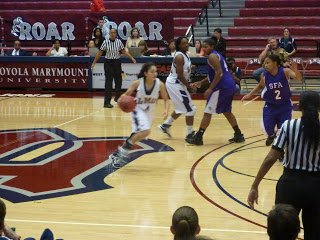 Kinda blurry, but that’s partially because Ramirez is always hustling. She’s only 5-foot-5, but doesn’t hesitate to take the ball to the rack. 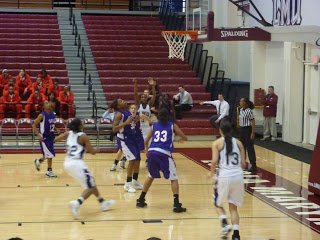 Alex Cowling (#3) swishes two of her game-high 27 points. Georgia players, in the red, are watching in case they have to play the winner of that game tomorrow.

Candice Nichols (#22) stumbles as she successfully puts up a shot.

Like the other semifinal before it, the Bulldogs played well in the first half but kicked their game up another three gears in the second half, burying their opponents.

Venerated Coach Andy Landers conducts a timeout in the first half. The Bulldogs bring their own chairs and have a small crew run and set them up for the players as a timeout is called.

Georgia’s Anne Marie Armstrong steals the ball, and instantly both teams are on the run.

Denver sets up the play while Bulldogs players clog the middle.

Porsha Phillips, who had 18 points and 11 rebounds, storms up the court after stealing the ball.

Landers is his usual, vocal self, and gives directions during the game at times.

A moment to read and relax