If you’re one to start ranting about how UCLA must suck based on today’s score, chill out. Once the Bruins were up by 18 in the second half at 54-36, Coach Nikki Caldwell put in the freshmen and other reserves, as she should have. Sure, UCSB closed the gap a bit, but UCLA was never in any danger, and the youngins got playing time.

Gaucho Coach Lindsay Gottlieb was kind, saying the Bruins “have Final Four potential.” But it’s not quite there yet. Caldwell sized it up accurately in her post-game interview.

“At halftime I asked them, ‘do you know each other?’ Because we weren’t playing together as a team,” she said. “In the second half we set the tone for a team effort.”

No one came up big today except UCSB guard Emilie Johnson, who lead her own team, and all athletes, with 14 points. Four Bruins were in double figures, barely, and three didn’t score at all. Shooting was 43.8 percent, but total rebounds were only 39. UCLA has some work to do, and I hope they get busy, because they’ve got Notre Dame coming up Thursday.

Ticha Penicheiro hits up the snack bar at halftime today. 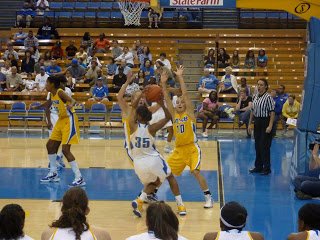 Rebekah Gardner showed the same amount of intensity today that she did in last week’s season opener. Emilie Johnson – number 10 – lead the Gauchos in scoring for the second consecutive game, with 14 points. 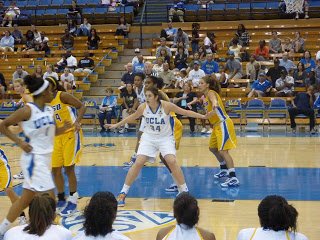 Freshman Corrine Costa (34) has nice footwork. She only scored two points, but she had three big blocks and was the only Bruin to pad that portion of the stat column.

Record-breaking, upsetting on day 2 of Tournament