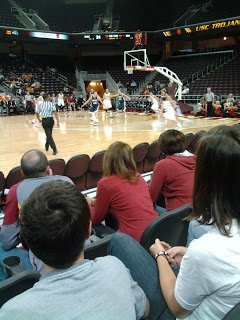 The USC Trojans opened their 2010-11 season at the Galen Center today with a come-from-behind win over number 22 Gonzaga, 79-73.

It was not a well-played game by either side. Gonzaga took a lot of shots – often of poor quality – or sometimes just for the sake of shooting (38 percent from 74 shots). USC had 25 turnovers, with 14 of those in the first half. The Trojans seemed to make forced passes early in the game.

I thought the Bulldogs did a great job of stopping USC’s half-court offense with quick hands and deflections of Trojan passes. USC helped Gonzaga by often using the entire 30-second clock before making their passes, thus leading to forced passes and forced shots. Twice in the first half the Trojans had shot clock violations, and this was a reason Gonzaga was able to lead 25-14 about 12 minutes into the first half.

The second half was a much better half for the Trojans. Although they still had too many turnovers (11), they were able to stop Gonzaga from getting scoring chances off those turnovers. The Bulldogs were only able to get seven points off turnovers in the second half. USC also became much more aggressive and drove to the basket with more authority. They then got quality shot chances and followed up those shots with 16 second-chance points, after only having four such points in the first half.

Highlights for the women of Troy were Briana Gilbreaths’ 21 points and 10 rebounds and Christina Marinacci’s 16 points and 10 rebounds. Freshman Cassie Harberts added 16 points in her college debut, and played 37 minutes. Harberts played with four fouls with about eight minutes remaining in the game, and was coming in and out over the last 3:45 – in on offense and out on defense.

Stephanie Gilbreath made her long-awaited debut, and had one basket in five minutes of play. The Trojans will need more minutes from Stephanie Gilbreath and freshmen Len’Nique Brown and Desiree Bradley. Those three logged no more than six minutes per player, leaving the bulk of play to the five starters and Marinacci.

Courtney Vandersloot led the Bulldogs with 19 points in 36 minutes. Gonzaga did not get much help from their bench, with only Jazmine Redmon putting up eight points.

USC next plays Monday night at fifth-ranked Duke. Gonzaga’s next game is Sunday at home versus Whitman. 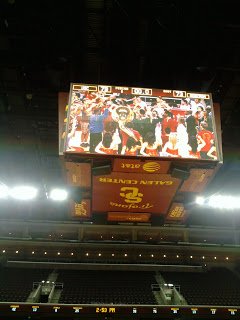 The women of Troy and their band party it up on the jumbotron after the game.

– Pictures and text by IM in OC

One word for today’s games: WOW

The night before a big rematch