Home Uncategorized Tennessee 2010-2011: getting back to the “old Vols” 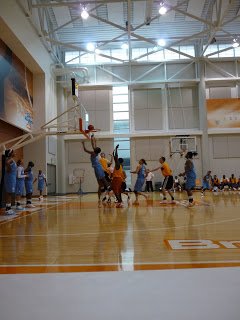 It’s orange vs. blue at a recent practice.

Again this year, Hoopism is pleased to interview respected scout.com reporter Maria M. Cornelius on the Tennessee Lady Vols. Cornelius is about as respected an expert on the Vols that there is, as she attends virtually every team practice. The deep, detailed pieces she writes are legendary.

SF: Does it feel like “the old Lady Vols” yet?

MMC: It is getting much closer. The “old” Lady Vols still had that enforcer in Nicky Anosike, the player who was undervalued at times by fans but not by coaches and teammates. Anosike held everyone accountable. This team still needs a take-charge player or players, and that likely will emerge as the season unfolds. Alicia Manning and Taber Spani are good candidates. Both are vocal and demand as much of themselves as they would others. Angie Bjorklund also has become a better communicator and can take charge in a team huddle.

SF: Has Angie Bjorklund matured into the senior/team leader that Pat Summitt always envisioned for her?

MMC: I think Pat Summitt knows that some players are quiet by nature and tend to lead by example more so than by voice. Angie fits this category, but she has come out of her comfort zone and will get the team in tight huddles. She also will talk on defense. Nicky Anosike was one of the best at this – she could call out defenses switches and screens from her post position. I also think the more Vicki Baugh plays, the more her voice will be heard.

SF: What has Vicki Baugh brought to the court and team, both with regard to the game and personally, since returning from injury?

MMC: Vicki is a competitor to her core. The buzzword with her is patience as it has been 21 months since she played in a competitive game. She needs time to get her knee adjusted to playing basketball again. Jenny Moshak said the issues now are what she calls “peri-knee” as the areas around the knee, such as iliotibial band and hamstring, work out the kinks. But she is already a difference-maker in practice with her defense – her hands are always active and her feet are always moving; she should be required viewing for a young post player – and her touch around the basket.

She also is an excellent passer. Alyssia Brewer is expected to return at some point in December, and those two could be outstanding together in a high-low game. 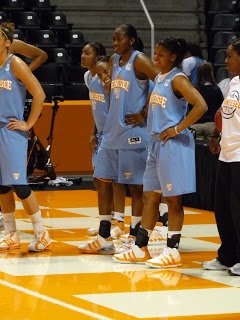 Players watch the action from the sidelines during practice

SF: Is Kelley Cain ready to dominate? Who will be her point guard this year?

MMC: Kelley Cain can dominate on defense. Her ability to blocks shots all over the court is rather eye-popping. She has had to deal with her own knee issues and a sore hip, so that affects her mobility, but she is a classic back-to-the-basket center who can score at the rim. When Tennessee wants to run half-court sets on offense, Kelley needs to be on the floor.

Shekinna Stricklen will start, for now, at the point guard spot, but she will slip more to the wing as the backups develop. Briana Bass has improved her shot and is pushing tempo. She knows she has to hit the three ball as her predecessor Shannon Bobbitt did and she lofted thousands of shots over the summer.

I have seen a willingness to move Stricklen more off the ball. Avant missed preseason time with allergy issues and then a hand injury, so she is playing catch-up, but she will give the team some quality minutes at the point guard spot this season. Meighan Simmons and Kamiko Williams also will have limited offensive packages from the spot so they can be used there at times.

SF: How has the loss of Alyssia Brewer affected the team?

MMC: The post depth took a hit. Glory Johnson is an athletic big but not a classic post player in terms of size. She is built like a sprinter and can guard a lot of posts, but Alyssia Brewer, Kelley Cain and Vicki Baugh will be needed to take on the bigs in the paint.

Brewer has been very upbeat in her rehab and maintained her level of fitness as best she could. She also looks physically fit despite the time away from the court. I think her return will be a tremendous boost and allows Tennessee the bodies it needs to go against bigger teams.

SF: Name the assets and strengths of the two freshmen, Lauren Avant and Meighan Simmons.

MMC: Lauren Avant can already play defense. That is rare in a freshman. She is still learning all the schemes – Tennessee defenses can get complicated, especially when to switch, help, etc. – so she is not always certain right now exactly where to be but she will try to get there in a hurry. She can also pressure the ball in the backcourt. On offense, she missed a lot of time with injuries so that part of her game is rusty, but she does have a point guard mentality and her first inclination is to distribute the ball. She can get to the paint on the dribble drive and hit a pull-up or get to the rim so that will keep defenders honest.

Meighan Simmons is the fastest player with the ball in her hand that I have seen in awhile. She has Shannon Bobbitt-speed in a taller body. She has deep three-ball range and also can score off the bounce. She also brings effort on defense, and that will score points with Pat Summitt, who hates to try to coach effort.

Both freshmen are eager and willing to work. They will have growing pains, all freshmen do, but it won’t be because of lack of heart. They want to help this team as soon as they can and they already practice as if that will be soon in the season.

MMC: Mickie now brings a head coach’s mentality to practice. In her previous stint at Tennessee, she wasn’t as vocal. That has changed now. It has been a godsend for Pat Summitt, who doesn’t have to always be the enforcer. She can let DeMoss’ voice be heard, too, and that keeps players from tuning either one out. If a player hears from one coach too much, it loses its effect.

Holly Warlick also seems more relaxed and is happy to have a close friend back on the staff. Last season when Daedra Charles Furlow was battling breast cancer, the coaches were down a staff member until Stephanie Glance was activated, and it took a toll on the other two assistants. They did all the scouting reports – those take hours – and had to be very hands-on in practice with what was still a young team. The distribution of duties is spread out now and Charles-Furlow remained as director of character development. She works with the players off the court and has had a very positive effect. She is someone they can go talk to when they need a sympathetic ear.

SF: What are the Lady Vols’ strengths right now?

MMC: Depth. And that’s the first time they can say that in years. When Lyssi Brewer comes back, they will have 13 players that Pat Summitt can put in a game in various situations and feel comfortable with what they will do.

They also have deep three-ball shooters in Angie Bjorklund, Taber Spani, Shekinna Stricklen and Meighan Simmons. When they are on the floor in assorted combinations, the defense has to come out on them.

The post play will be among the best in the country when Lyssi returns and Kelley and Vicki get their sea legs, so to speak. Given the size of some of the top teams in the country, a strong post game is a must this season to get to the Final Four.

The other strength is experience. This team has been through a lot, especially the freshmen who are now juniors, and they have played a lot of games in a lot of venues. Nothing is new in the SEC this season – they’ve been to every team’s gym now.

The players also are resilient. They watched a former teammate nearly die in Amber Gray and knew last season that a beloved coach was fighting breast cancer. They bounced back from one of the worst seasons in Tennessee history to a 32-3 record.

They know the lack a huge notch on their resumes – a Final Four and a national title. They seem to now understand how hard they have to work to accomplish that. 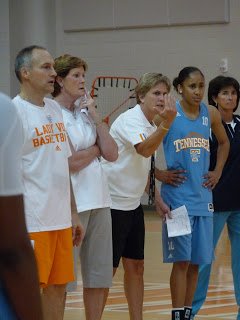 SF: Who do you predict will be key contributing players this year?

The starters likely will change on occasion but for now Pat Summitt is going with Shekinna Stricklen, Angie Bjorklund, Taber Spani, Glory Johnson and Alicia Manning.

I expect all five of those to be major contributors, as will Vicki Baugh, Kelley Cain and Lyssi Brewer in the paint.

That leaves five more players and I think Pat Summitt will try to squeeze as many minutes out of as many as she can this season. The freshmen will definitely contribute as they have speed, something Tennessee has needed more of in the backcourt.

Bree Bass remains a steady and solid player when she’s on the floor. She also is the one you want on the floor if the team has to hit a free throw. She is automatic from the line. Sydney Smallbone can knock down shots and has worked to become a better defender.

Kamiko Williams remains one of the best athletes on the team and can get to the paint pretty much whenever she wants to with the ball. I am curious to watch her development as a sophomore as she has the potential to also be a shutdown defender.

In terms of player I expect to be the key in terms of contributions this season, it has to be Vicki Baugh. She has been sorely missed because of her skill, heart and desire. She is not just a special basketball player. She is a special person.

SF: How is team chemistry?

MMC: Excellent. This group has been the most cohesive team I have ever watched at Tennessee. They have a genuine love for each other in what they call their “sisterhood.” The players who face the greatest challenges – Briana Bass with her size and Sydney Smallbone, who has worked to improve her defense – are the ones they cheer for the most in practice.

It’s a special team in terms of chemistry, and the freshmen seem to want to fit in and be a part of it. 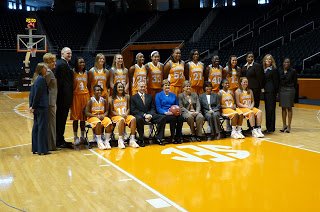 Tennessee opens their regular season tonight against Louisville. The Cardinal’s new arena has been sold out for the game.

WNBA’s choice down to two

Basketball still waiting in the wings

Sky steal everything but the game on Friday

‘Tis the second half of July