UC Irvine hosted Concordia University (an NAIA team) in an exhibition opener for both teams last night. The game was a contrast in styles, but since both sides had many players not dressed it is hard to tell if that will be the way they play all year. UCI only dressed nine players and played eight for most of the game. I counted seven on the bench in warm ups so there will, or might be, some red shirts in the works. Sophomore Lauren Spinazze had her right arm in a sling.

UCI relied on an inside game, with either drives or post up moves. I don’t think they hit more than two or three outside shots all game. Concordia, on the other hand, had an outside game, making about 10 three-point baskets. Concordia did make some inside shots and some fast break points, but it seemed they really enjoy moving the ball around for the outside shot.

The Anteaters led most of the game, including 45-39 at the half. In the second half they opened up a 10-point lead, and the Concordia hit some threes and two-point baskets and fouls to take a 65-64 lead with 8:27 left in the game. Concordia went cold after that and didn’t score another basket until there was about a minute left in the game, and by then they were down by nine points.

Leading scorers for Concordia were senior guard Patrice Hunter, with 18 points, and Nicole Fu, also a senior guard, with 13 points. UCI had five players with more than 10 points, led by senior guard Jade Smith-Williams, with 16 points, and junior forward Kiara Belen, with 18 points. Mikah Malay-Karros added 15 points and had several drives to the basket. She definetely is the leader for the Anteaters. 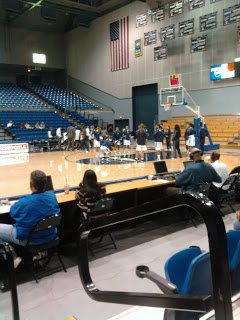 UCI warmups before the game 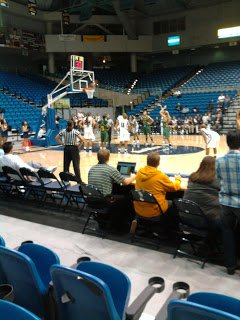 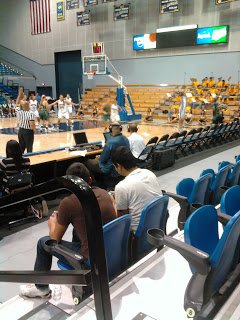 Stories and pictures by IM in OC

Storm move on to Finals; Aces force a Game 5

We have our first upset of the season