The matchup I went to see at the Beverly Hills High School fall league today featured Saugus and Inglewood. Saugus is north of the Los Angeles area, and they had an 8-19 record last year. Inglewood was a 09-10 3A state semifinalist.

‘Wood has lost three key playes in Hazel Ramirez (LMU), Janelle Ross (Dartmouth) and Noelini Tuiasoa. They are in somewhat of a rebuilding phase, lead by nationally-ranked forward DeAjanae Scurry.

Saugus got out to an early lead today, holding the Sentinels scoreless for several minutes before point guard Arielle Jones hit a 15-footer. That seemed to ignite her team, who quickly caught up and then lead Saugus by 3-5 points for the rest of the game.

The Centurions, who lost only three to graduation last year, rely a lot on juniors Megan Dawe and Kim Smither, who are both over six feet tall and like to block shots. The team, in general, plays the game very rough….and we’ll get to more of that in a moment.

Inglewood, with several newcomers, looks athletic as usual. Scurry has added dribbling to her game, and had a fantastic bucket go in as she hit the floor in the second half. But the entire team needs to work on passing and rebounding.

The game resembled football more than basketball. Girls always dive for the ball, but there were more dives today than you see in an Olympic broadcast. There was also a lot of wrenching of the ball, i.e. trying to wrench it away from the opponent. Bodies were hitting the floor, but the referees did a good job of keeping the game under control.

These games, in the fall, are when you see glimpses of what and who is under construction. It’s exciting. 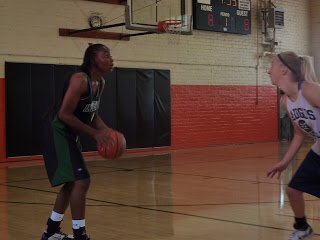 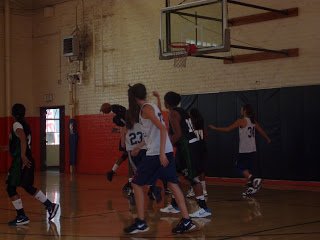 Camille Baker (#1 in the dark uniform in the middle – look hard) snags the rebound. 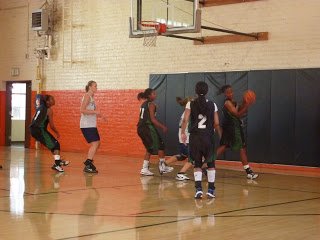 Scurry spins after getting the board and prepares to pass to teammate Arielle Jones (#2).

Games back on tomorrow