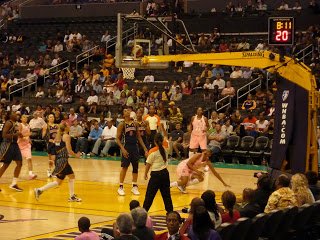 Believe it or not, Tina Thompson (falling to the floor) made this shot in the first quarter. 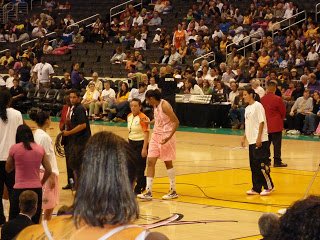 The refs were in danger of getting run out of the place in the first quarter, when they allowed Thompson to get fouled three times in a row with no call. The last one was particularly blatant, and the crowd erupted in jeers. Ticha Penicheiro threw her hands out to her sides and walked on court toward the refs. As Thompson complained, Penicheiro kept an eye on the situation. 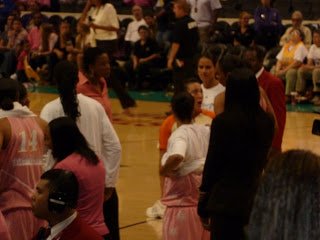 The entire Sparks coaching staff joined her on the court, as well as most of the team. 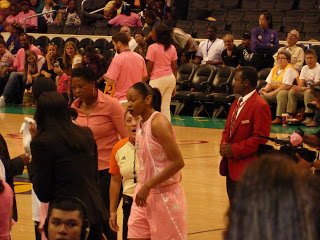 Thompson finally just said “whatever” and walked away. 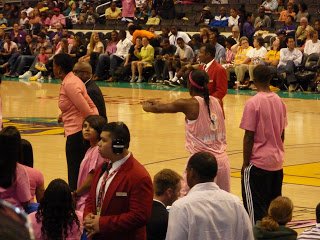 Delisha Milton-Jones was doing some interesting yoga-looking balance stuff and lunges on the side, while Assistant Coach Steve Smith talked to players during a second quarter timeout. 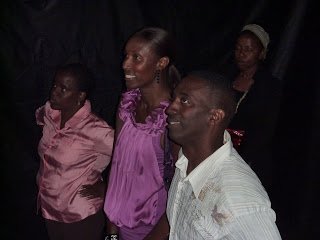 At halftime, Lisa Leslie and Michael Lockwood watch a video of Leslie on the big screen while waiting in the tunnel. 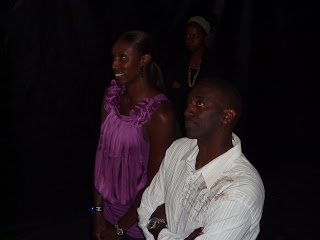 They were lighthearted, having a good time. 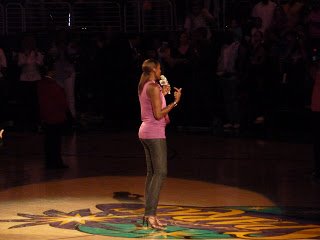 Leslie then addressed the crowd, thanking them. 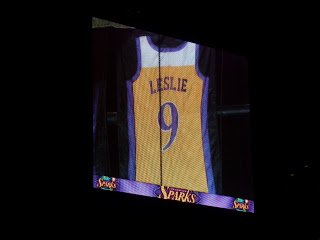 Her jersey was raised to the rafters…… 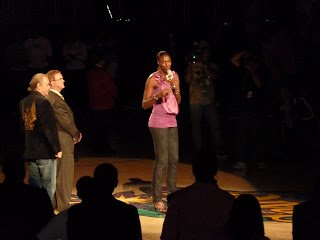 ….and she ended by noting that she was from the inner city, and that if she could do it, other young girls could do it. 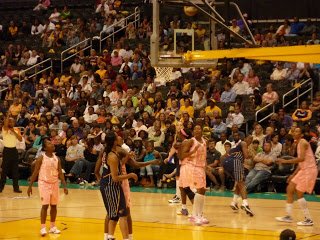 The Fever’s Ebony Hoffman, far right, made this shot in the third quarter as she was fouled. 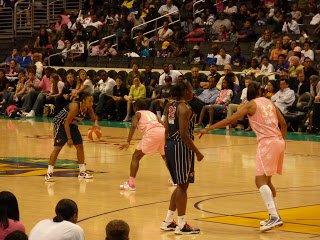 Briann January vs. Andrea Riley. Riley played like a big girl tonight, with double-digit scoring. She also had two behind-the-back assists that gave me palpitations. 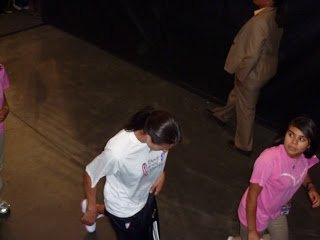 Penicheiro didn’t play tonight, and limped into the tunnel twice during the game. What happened? 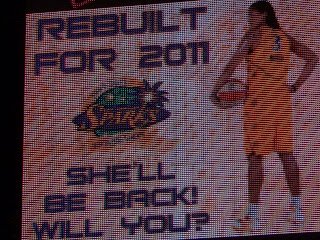 Leslie has her sights set on being an NBA TV analyst.

The Mercury’s Diana Taurasi will be fined, as the technical she incurred in elbowing Davenport Sunday night was upgraded to a flagrant two foul.

No one is even close to the Storm, especially after their hard-fought victory this evening in Atlanta. The win gives them home court advantage for all of the playoffs.

That pretty much guarantees them the championship right there, trust me. The Key Arena crowd is their sixth, seventh, eighth, ninth…..woman.

Records could fall this WNBA season

Boucek out, Kloppenburg in for Seattle