The action was fast and furious today. So far only the scores of the exhibition games have been posted, but the brackets will be filled in soon.

I caught a few games earlier in the day, including Cal Sparks Gold’s matchup with the Arizona Lady Rebels. Sparks Director Elbert Kinnebrew had said USA Basketball Under-18 team gold medalist Reshanda Gray continued to improve with every game; that last week at the End of the Trails Tournament in Oregon she had played one of the best games he’d seen a high school player play. I was slightly skeptical, but after seeing her play the Arizona team, I’m not anymore. She was doing things I hadn’t seen her do before, like spin, put up reverse layups with the authority of a five-star general, and knock down a 15-foot jumper that shimmeyed through the net so cleanly that I had a mild outburst. Go’head, Gray.

The most anticipated matchup of the night was West Coast Premier Black against Cal Sparks Gold. WCP had won their championship at EOT last week, and Sparks Gold placed third.

The Sparks got off to a slow start and weren’t rebounding. WCP capitalized on this and were helped by the referees, who seemed to miss the same calls on WCP that they made on the Sparks. WCP is a tall team, and I was confused by the Sparks’ substitution patterns. If my team wasn’t rebounding, I’d put at least three of my four bigs in, but that’s just me.

WCP took a 15-point lead by the beginning of the second half, but the Sparks charged back and closed the gap to four points. Both teams clamped down and played each other hard, resulting in a double-technical with just over a minute to go. That and the whistle-happy refs kept things off-kilter. But in the end, it was the Sparks’ own errors that kept them from winning. WCP took it, 60-55. 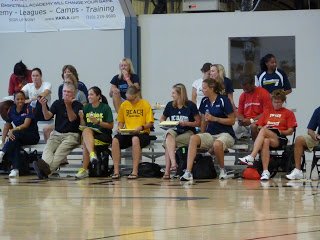 A number of college coaches were in the house today, from up and down the west coast and across the country. They included Oregon Coach Paul Westhead (tan khakis), his assistant Kai Felton (green Ducks shirt) and Cal State Northridge Coach Jason Flowers (red shirt on right). 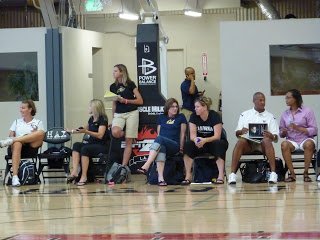 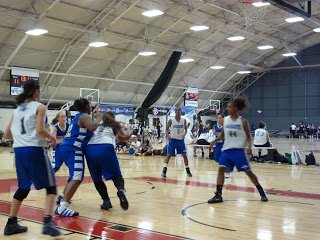 Salesian Force (white uniforms) is a new LA team on the rise. Here they beat the Stockton Mustangs Future, 69-28, in their second game of the day. 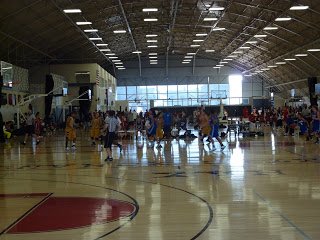 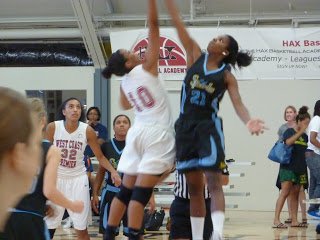 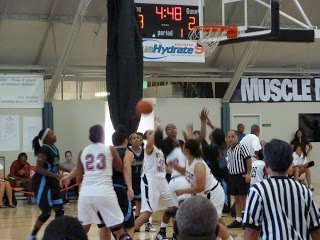 WCP filled up the paint, but the Sparks could have got more rebounds if they tried. 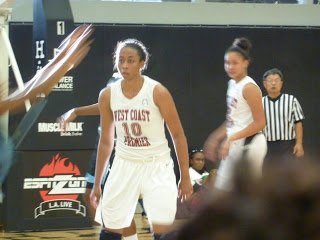 WCP’s Swain, who has committed to UCLA, was sent to the free throw line an insane number of times in the first half tonight. 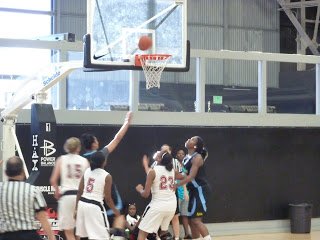 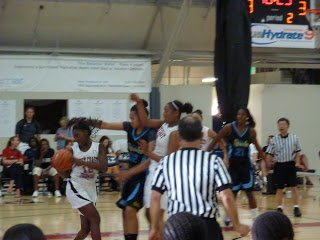 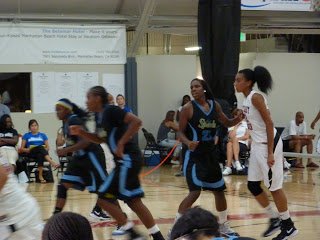 The matchup between Gray (second from right) and WCP’s Devin Hudson (far right) was intense at times. Maybe it’s because of a 2009 high school playoff game that I remember well. 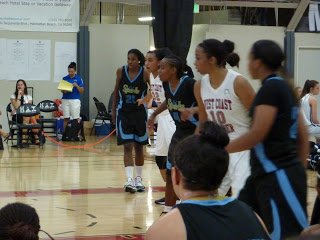 Both teams gird for the Sparks charge up the court in the second half. 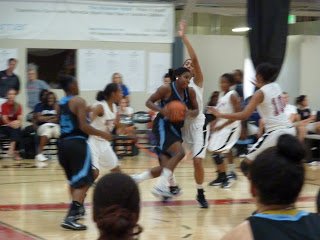 Gray makes a run for the basket. 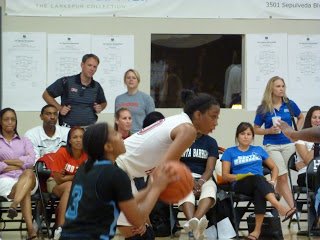 As time is ticking down in the game, both teams are tired. Swain grabs her shorts as Sparks point guard Ariya Crook-Williams shoots a free throw.

Meanwhile in Cincinati, the Adidas National Women’s Basketball Championships attracted a grip of teams and NCAA coaches this week.

It’s all in how you look at it, + Kendall Hackney

Polls are out for the week

Just a little bit of “hmmmm”

Tops in RPI, Pac-12 teams now battling each other

Dawn Staley wastes no time in getting ’em signed