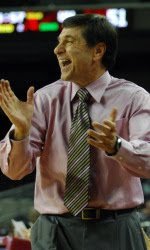 Mark Trakh cheers on the Trojans during a game last year

Mark Trakh has been named the associate head coach at San Diego State University. The former USC and Pepperdine coach was hired for his wealth of experience – almost 30 years, in fact:

“We really like the talent level of our 2010-2011 team,” (Coach Beth) Burns said. “We are short on experience, however, and expect all five newcomers to compete for playing time this season. With that in mind, we chose to go after the absolute best teacher we could find to contribute to our program right now. Fortunately for us, that coach will be Mark Trakh.”

The hiring comes 14 months after Trakh resigned from USC, where he was head coach for five years.

Trakh joked this afternoon that he “gets a chance to go back to college and learn.”

“This is a great opportunity to work with Beth Burns,” he said. “She’s a great coach and a great person.”

Last week I talked to several of Trakh’s former players – some from Brea Olinda High School, where he coached from 1983-1993; some from Pepperdine, where he was head coach from 1993-2004, and some from USC. They wanted to set the record right after at least one source claimed Trakh used to be “harsh on players as well” as former Oregon State University coach LaVonda Wagner, fired recently for allegedly verbally abusing players. Each woman claimed that nothing could be further from the truth.

Aarika Hughes, who just graduated from USC, said she was a bit homesick when she first arrived from Oregon and began to get lax. Hughes said Trakh gave her some “tough love,” which got her back on track.

“He’s big on discipline, big on life skills and big on learning life lessons through basketball,” Hughes said. “He has a true interest in his players.”

She credited Trakh’s influence as the reason she graduated.

“He’s like a father to me, and I’d do anything for him,” Hughes said. “He’s such a great person.”

Jacki Gemelos was part of Trakh’s first recruiting class at USC. She said what attracted her to Trakh and the Trojan program was the coach’s high morals, standards and emphasis on education.

“I’ve never experienced any negatives with him,” Gemelos said. “He reminds me of my own dad.”

Long Beach State Coach Jody Wynn has known Trakh since she was 10 years old, and he was her elementary school P.E. teacher. Trakh was an English teacher at Brea Olinda at the time, but taught one class at her school – a basketball class. She credits him for getting her hooked on the sport.

During the time she played for him at Brea, Wynn said Trakh would frequently take her and other players to college basketball games. She called him a kid at heart, and said he always had lots of jokes for his team. At the same time, she said he ran a tight ship.

“He demands perfection, and he wants everybody to be their best at all times,” Wynn said. “He has a very disciplined system.”

In his early coaching days, Wynn characterized Trakh as a “screamer and a yeller” because of his high expectations. Time has eased the yelling, but not the standards.

Trakh hired Wynn as his assistant coach after she graduated from USC, and she followed him back to her alma mater when he got the job there – a total of 13 years.

“I would never be who I am today without him,” Wynn said.

Another one of Trakh’s OG’s is Hawaii assistant coach Da Houl, who played for him when he first started coaching at Brea in 1983. This was before Brea was in its current location, and before the school became known as a girl’s basketball power.

“We didn’t know how to play ball, and here’s this young guy full of energy and knowledge,” Houl said.

Houl said she barely knew how to dribble when she started playing with him as a sophomore. By her senior year, Brea went to the CIF state playoffs.

“He’s extremely meticulous about the fundamentals of the game,” Houl said. “He taught us how to play, and we worked our butts off.”

By the time Trakh left the school for Pepperdine, Brea had a reputation bigger than itself.

Aimee McDaniel played for Trakh both at Brea and at Pepperdine – the latter unintentional, as she was already at the school before Trakh got the job. Like Wynn, McDaniel met Trakh through his basketball class. She was a soccer player at the time, but Trakh saw something in her and began pushing her to try basketball. Once she did, she discovered she was pretty good at it.

“By my freshman year, Mark approached me one day and said, ‘are you ready to give up this soccer thing?'” McDaniel said.

She did, and she became the Orange County player of the decade (1980’s). Her number is retired at Brea.

“He’s a great X’s and O’s coach, but he also teaches you the game of basketball – he doesn’t just go over the skills and put players through the drills,” McDaniel said.

McDaniel called Trakh one of the most intelligent men she’s ever met. She said while he was at Pepperdine, he expanded the team’s playbook further than players had ever seen.

“He taught people to work hard and to be proud of themselves,” she said.

Beatrice Godoy was part of Trakh’s first recruiting class at Pepperdine. She said she wasn’t prepared for the high standards he held when she first arrived, and she fought him on it. Eventually, though, she understood where he was coming from.

“At first it was all just for me, but it turned into doing it for him,” Godoy said. “It was realizing we all had the same goals, and doing it for him and the whole team. I learned tons from him.”

Heather Oliver just graduated from USC, and spent her freshman and sophomore years at an Arizona junior college. She said what drew her to USC was Trakh’s passion. What kept her there was his caring for his players.

“He always had an open door policy with us – we could always come to his office and talk about anything,” Oliver said. “He cared about the whole person.”

Oliver said he was honest in his coaching, and she appreciated that.

“He told you want you needed to work on, and not in a negative way,” she said. “He wanted you to get better.”

Gemelos mentioned something I confirmed with Trakh: every player who has played for him has graduated. In 16 years of college coaching, he had three transfers at Pepperdine and one at USC.

Trakh will begin his duties at San Diego State immediately.