What are the odds of facing a team three times and having the outcome decided by a point on each occasion? I’d say pretty high, but the Sparks and Mercury did it anyway. This time, however, Los Angeles came out on the winning side.

Here’s an accurate summary of 46 crucial seconds of the game:

Things were beginning to look grim for the Sparks when the Mercury (3-5) led, 89-84, with 56.6 seconds remaining in the fourth, but Kristi Toliver converted a three-point play after being fouled on a turnaround jumper to bring the Sparks to within two.

Noelle Quinn then made a huge three-pointer with 18.3 seconds on the clock to give the Sparks a 90-89 lead. But the Sparks then had a complete mental lapse on the other end, allowing Temeka Johnson to shoot a wide-open layup to give the Mercury a one point advantage with 8.8 seconds left.

I was sitting with two friends, and I had bonded with the friend of one of them who was sitting right in front of us. When Johnson threw down the shot, some fans went to pieces. But Margaret and I turned to each other and both said, “8.8 seconds is a lot of time!”

I guess I had a feeling they would pull it out. In this case, it was Candace Parker who did it. Thanks, CP. She told one news source that they “needed the win so bad.” They sure did, and so did the fans. Hopefully this can serve as an impetus for the next game.

Thoughts, in no particular order:

– Ticha Penicheiro, Andrea Riley and Betty Lennox all run the ball up the court when they’re playing PG. Kristi Tolliver walks it up. It drives fans bat sh*t.

– At some points the Sparks looked completely confused. At many of those same points, crowd members could be heard yelling, “Set up a play! Set up a play!”

– After a third quarter timeout, Sparks players came out and some went on to the court and had to be called out by teammates; they didn’t know who was supposed to be in the game or not. How could you not know just coming out of a timeout?

– A row of fans lined the railings on each side of the tunnel after the game. When Betty Lennox came off the court, they started SCREAMING and carrying on and could hardly be appeased even when she stopped to give them some love. Betty is a rock star! I hope Coach Gillom plays her more often. 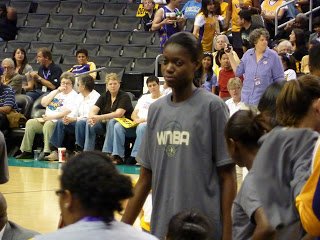 I took this picture of Chanel Mokango, the Sparks’ new player, because I thought she wouldn’t get in the game again. She did later, but it was only for a few minutes. 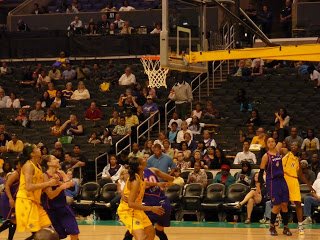 Delisha Milton-Jones tries to hit in the third quarter, while Candace Parker and Tina Thompson watch. She warmed up more shortly after that. 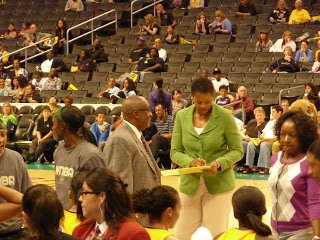 Jennifer Gillom and assistant coach Steve Smith confer at a timeout in the third quarter. 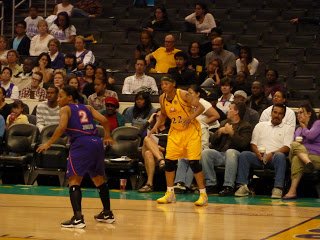 Betty Lennox – she of 16 points, eight rebounds and six assists – watches the play in the third quarter. 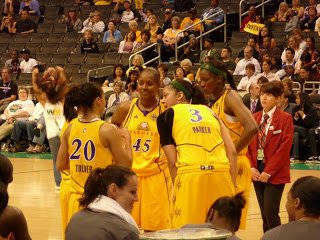 Candace Parker speaks emphatically to the team at a fourth quarter timeout. 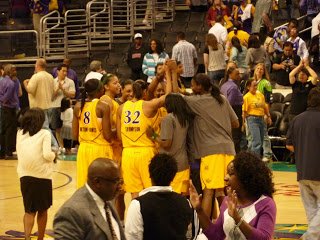 Big Monday: herstory is made