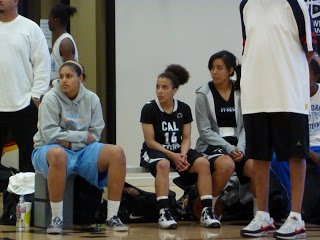 Alyssia Brewer sat at the head of the Cal Storm Taurasi team’s bench today during their championship game against Cal Sparks Gold, as part of the Cal Sparks Graduation Games 2010 Tournament. 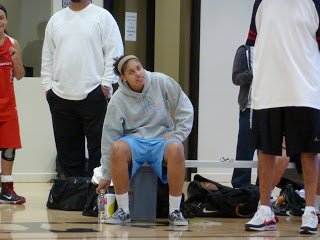 The Tennessee forward was with her former club team for their games all weekend long.

There was a familar face accompanying the Cal Storm club ball team at a tournament this weekend at the Hangar Athletic Exchange (HAX) in Hawthorne, CA. Familiar to the team because she used to play for them, but more easily recognizable to everyone else from television: Tennessee Lady Vol Alyssia Brewer.

The 6-foot-3 forward just finished her sophomore year, and is taking a break before starting summer school with the rest of her Tennessee teammates. She was one of seven freshmen in the vaunted 2008 class that was hyped as the “new” Volunteers after Candace Parker’s graduation. But an unprecedented NCAA Tournament first-round exit last year, and a Sweet Sixteen loss this year has shown that rebuilding takes time.

Brewer took a few moments to talk with me today about Tennessee, her California visit, and more.

Brewer: Yes – LA’s like a second home to me, and I have family out here too.

Hoopism: You played high school basketball in your home state of Oklahoma and played club ball in the summer here?

Hoopism: Your California Storm teammates and coaches must mean a lot to you for you to come back to see them.

Brewer: They really do. I still have relationships with all of them.

Hoopism: So how are things going at Tennessee? What’s next for you and your teammates?

Brewer: Classes and things in general are OK, but as far as basketball, the next two years are do or die for me.

Hoopism: You mean as far as getting a championship?

Brewer: Yes. It’s halftime for me – it’s like I’ve played two quarters, and now the last two quarters are coming up, so I’ve got to get ready so we can make it happen.

Hoopism: What parts of your game are you working on?

Brewer: I’ve been working on sharpening my skills, and getting back more to how I was playing before, in high school.

Brewer: I’ve been working on getting my jump shot back.

The Lady Vols return to Knoxville next month.

Day 2 results, looking ahead to a huge day 3

Game threes are on