The tournament was played at Mt. Sac, in Walnut, and Cal Poly Pomona, just down the street in Pomona. First-round and exhibition action was Saturday.

Perhaps the best game Saturday afternoon pitted Essence against FBC. Nationally-ranked Essence began strong, and looked like they were going to wipe the floor with FBC. Midway through the game, they lead 24-11. Then FBC woke up and went on a run, catching up to their rivals in the second half. The last few minutes were a dog fight.

FBC’s Jeanier Olukemi (Brea Olinda) unleashed back-to-back threes to tie the score up. But Essence’s Myeisha Hall stole the ball and dished it to Niya Johnson for the bucket for the breahtaking finish.

FBC’s other strong player is Tear’a Laudermill (Canyon), who I saw play last year. I was equally impressed by her last night, and I wonder why she’s not ranked. She’s incredibly fast, has a sweet shot, and isn’t afraid of anything.

Essence is a great team. They’re ridiculously quick, and they all seem to have bionic court vision. They anticipated FBC’s moves most times before FBC even knew what they were. I can see why they’re such a power. 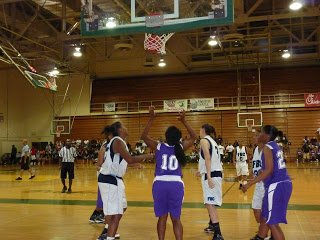 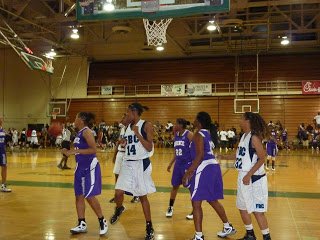 FBC came back from behind and almost pulled off the upset.

One of the teams at this tournament with a lot of ranked players, the Sparks did allright this tournament, but it wasn’t their best showing. If their two (ranked) bigs, Reshanda Gray and DeAjanae Scurry, can completely gel with their (ranked) point guard Ariya Crook-Williams, they’ll be deadly. 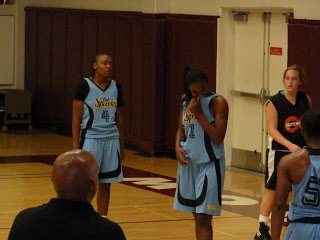 DeAjanae Scurry (left) and Reshanda Gray at a pause in the action against OC Elite Saturday afternoon….. 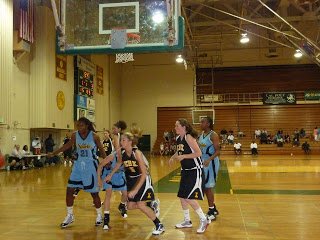 …and during play against EBX Black Saturday evening.

Boo was ahead 25-24 at the half, but DFW went on a 10-2 run to begin the second. Then Boo caught up; DFW was only up 39-38 at the 5:12 mark, and they maintained a one-point lead. There was a quick foul fest with less than two to go, and the teams traded free throws. Boo made a three with 20 seconds to go, but then DFW point guard Moriah Jefferson was fouled on the next possession, and made both free throws to put them up 50-47. A last-second Boo attempt at the buzzer failed, and the score remained the same.

Boo players are very passionate; they beat the walls and scream when they miss shots, and slap each other’s hands off when they do well.

DFW players are small, but fast. Point guard Moriah Jefferson is pretty excitable and passionate herself. When Empress Davenport fouled out, she went and shook hands with all the Boo bench players. I’d not seen that before.

All in all, an impressive win by DFW. I saw Boo play three times this weekend, and they honestly didn’t look like all that, as I’d been told. 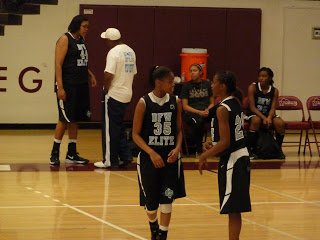 DFW Elite point guard Moriah Jefferson (35) is quite a player, and quite a character. She drove up the court, to the hoop, and put up the points. She also jumped around between free throws, at the free throw line, late in the game to stave off cramps. 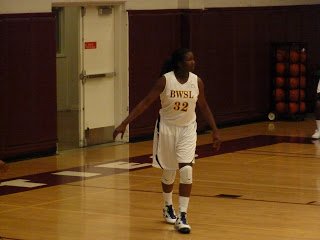 Boo Williams star forward Elizabeth Williams put on a good performance, but she could have been even better. 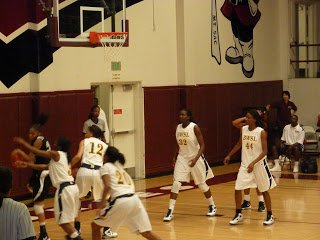 Action in the first half was physical. 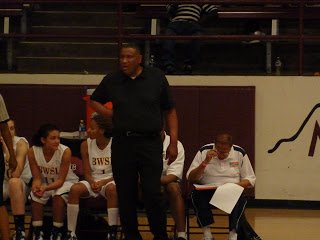 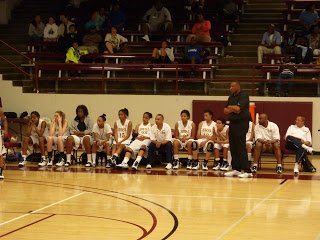 This is Boo’s really loooooong bench. 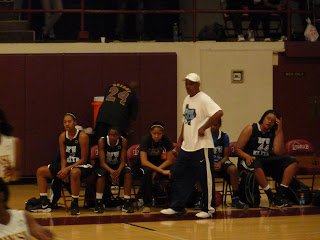 This is DFW’s really short bench, which made their win over the top team even more impressive. 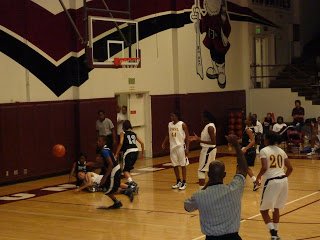 Mad scramble at the end of the game when things got hot. 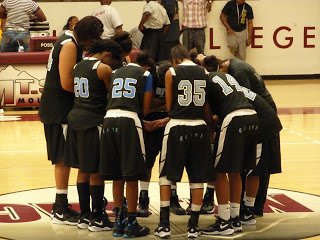 DFW huddled up after their victory.

Heading into the weekend with much to read

Two arrested in the killing of Tayshana Murphy