Mater Dei finally got the monkey off their back and beat Brea Olinda today. You can see what it meant to them in the face of Alexyz Vaioletama in this picture.

But the end of the game was controversial, so it wasn’t a completely clean win. Mater Dei lead 50-45 with less than 30 seconds, when Brea’s Kelsey Harris was fouled behind the three-point line. The ref right next to her blew the whistle and held up three fingers, indicating she’d get three shots. But when she missed the second one and players collapsed into the key to resume play, none of the refs stopped the game to give Harris her third shot. Ladycat Coach Jeff Sink protested and got T’d up. But Monarch Kaleena Mosqueda-Lewis missed both tech free throws. Just sloppy and stupid overall. If the refs had correctly called players back for Harris’ free throw, the outcome of the game might have been different.

Mosqueda-Lewis has become somewhat of a celebrity in these parts – especially after she verbally committed to UConn last fall after playing travel ball in Tennessee over the summer. But she’s not the best player in California. She might not even be ready to be a Husky if she doesn’t change a few things. For one thing, she relies too much on her outside shot which, even though it’s silky, can’t be her entire game. M-L needs to get quicker and move better; she’ll probably have to drop a few pounds. She also needs to get stronger inside, and to get better at free throws. I don’t see Geno accepting anything less. 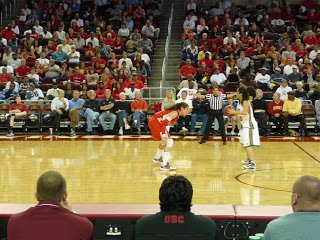 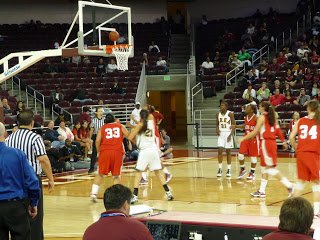 Brea’s Breana Buczek (#21) puts up a shot in the third quarter. 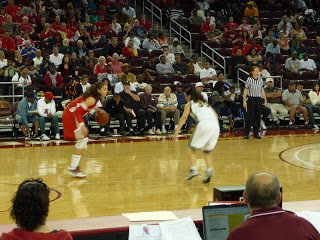 Jordan Adams dribbles up court in the fourth quarter….. 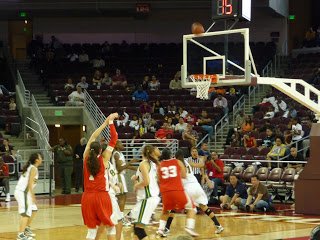 …..and unleashes a three. 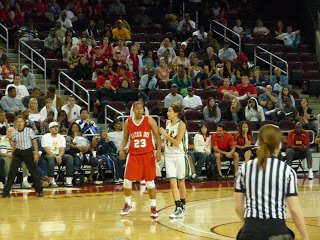 Kaleena Mosqueda-Lewis is going to have to work on her game a lot to play for UConn, to whom she verbally committed last fall. She missed a lot of free throws and some easy layups today. 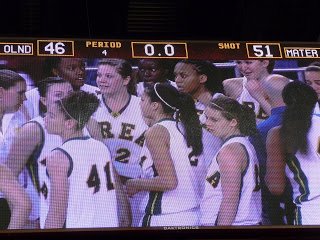 Brea reacts at the buzzer, on the big screen. 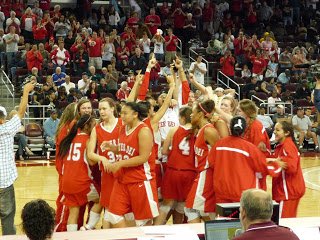 Mater Dei is happier on their side of the court.

Everyone knows that this was the true Division II state final today. But thanks to the CIF, the fake state final will put Mater Dei against Carondelet next weekend.

Bishop Amat upset Inglewood earlier in the day, 56-54. They will face St. Mary’s of Stockton next week for the Division III championship. I predict Bishop will get stomped.

Readying for what comes next

People, teams and pros in the news

Mystics, Storm win on day one of semifinal round

Pac-12 preview: the University of Oregon