USC capitalized on a few key Oregon turnovers to narrowly beat them, 80-76 last night. It was disappointing, but it was a good game.

The UCLA-Oregon State game almost put me to sleep. UCLA is good enough where they had a bit of a breakdown at the end of the game and let OSU catch up, but they still whooped them 60-44.

UCLA coaches watched the first game, and Stanford coaches watched both games. Lisa Leslie, who looks to be ready to give birth any second, and her husband were also in press row. So were a few other basketball celebrities, the Sparks executive staff and some spare ESPN reporters.

I will be back in the house for the championship game Sunday. I hope it’s a good matchup. 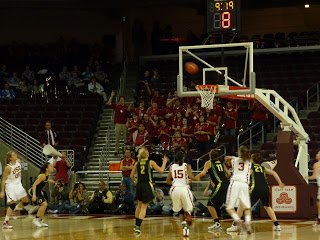 First-half action during the Oregon-USC game. 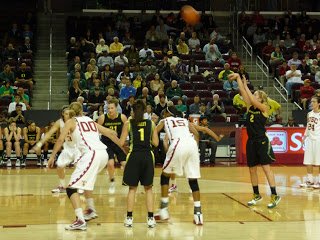 Duck Micaela Cocks take the free throw in the second half. 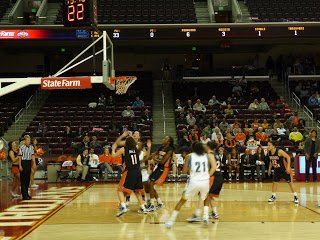 UCLA supastah Jasmine Dixon puts one up in the first half of the UCLA-Oregon State game. 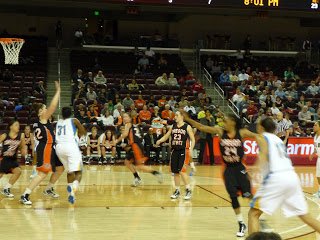 Bruin Moniquee Alexander is actually trying to do something under the basket (!) 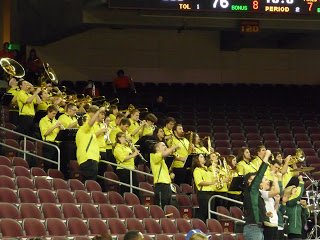 Cool things 1: the Oregon band was spirited in a way that I’m used to from the great bands, i.e. some low-key heckling of the USC team. “If this is your home court, where are all your fans?” one yelled. Audience members were chuckling. 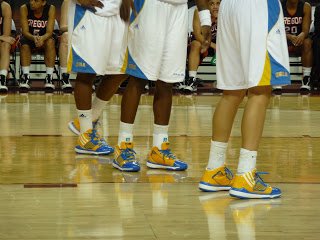 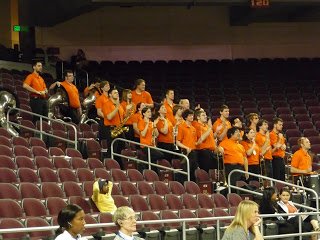 Very uncool thing: the Oregon State band. Their attempts at heckling went way across the line. When UCLA forward Christina Nzekwe went to the free throw line in the first half, one of the OSU band members shouted at her: “You look like a man!”

No audience members laughed. I was stunned. And so glad Christina was all the way across the court, so that maybe she didn’t hear that.

I know Christina, and she’s one of the nicest kids you’re going to meet. I wonder why people don’t stop to think, when they say things like that, that the player’s family, friends and former coaches could be sitting there.

I’m an Oregon graduate and never liked OSU. I hate them now.

Someone I know is covering the event for the website for which they write, and asked UCLA Coach Nikki Caldwell how she motivates her team. The LA Times got the exchange partially right in this write up. The moderator ended it after Caldwell said that days off are a motivator for the players too, and the reporter nodded and acknowledged that she knew that, as she followed the coaching staff and players on twitter. Caldwell found that amusing, and the moderator then said “let’s wrap it up.”

Some of the media in the room didn’t seem to know whether or not Caldwell was serious in her comments, and I know it’s because they don’t understand the Tennessee Way. They’re learning, though. And as Caldwell and the Bruins keep ascending the basketball ladder, they’ll figure it out even more.

Here are two write-ups on the games:

USC capitalized on a crucial Oregon turnover in the waning seconds of Friday night’s quarterfinal matchup to top the Ducks, 80-76, and advance to the next round.

The neck-and-neck game, which saw the two teams exchange leads eight times in the first half alone, went down to the last minute. Oregon had built a five point lead – 64-59 – with more than nine minutes to go, when USC went on an 11-3 run. The Trojan’s defense also disrupted the Ducks, causing them to turn the ball over five times in the next four minutes.

Dueling free throws made it a 73-71 USC lead with just under a minute to play. But Trojan point guard Ashley Corral hit a long-range three-point shot at the 24-second mark to put her team up by five. Duck sophomore guard Nia Jackson then calmly drove to the hoop, put it in and was fouled. She nailed the free shot to put her team within two points with 16 seconds to go.

Oregon then fouled Jacki Gemelos, who hit both free throws. But on the Ducks’ next possession, senior guard Taylor Lilley lost the ball out of bounds with 10 seconds to go. Oregon had no choice but to foul, and Gemelos again made both free throws, putting the game out of reach for the Ducks.

Lilley lead all scorers with 22 points. Briana Gilbreath had 19 for the Trojans, including 15 in the second half. Jackson and Oregon forward Victoria Kenyon each had 18, and Corral put up 16 for USC.

Oregon Coach Paul Westhead said that while his players’ efforts were laudable, their opponents had more at the end.

“SC made some big shots in the last minute, and that was the difference in the game,” he said.

Cooper claimed that when USC was behind, he “wasn’t fearful.” At the same time, he recognized that the game could have gone either way.

“(This victory) means that our team was better on this particular night,” he said.

Both coaches are in their first years at their respective schools, and both teams have shown notable improvements under them: USC’s, most notably in its standings, finishing third in the Pac-10; Oregon’s, in its players.

Jackson and Lilley, who spoke after the game, are probably the players who seem to have improved the most under Westhead. Lilley, a senior, didn’t make any all- Pac-10 Tournament last year, but seems destined to make one this weekend. Jackson has played all season with a passion that Oregon fans haven’t seen before. She acknowledged that her game has “changed a lot” in playing for her new coach.

The Bruins, who were never seriously challenged by the tenth-seeded Beavers, jumped out to a quick 7-0 lead to begin the game before their opponents were finally able to respond at the 17:01 mark. UCLA lead 37-18 at the half, and were ahead by as many as 21 points in the second period.

With 5:11 to go, OSU went on a small run and cut the lead to where it eventually was at game’s end. This lack of response, coupled with the Bruins’ 23 turnovers on the night, was cause for concern for Coach Nikki Caldwell, who said after the game that she was disappointed in her team’s effort.

“We worked hard all week, but we didn’t play together as a unit (tonight),” she said. “There was a lot of individual play out there, and that’s not who we are. We got away from the little things.”

Caldwell, whos main refrain is for the Bruins to play a full 40-minute game, acknowledged her team is still working on that. And she noted that sophomore forward Jasmine Dixon, who had 14 points on the night, and freshman forward Markel Walker, who added 10, were two of the strongest players on the squad. But Caldwell also noted that UCLA needs more.

“We have two very good players in Walker and Dixon, and they will be among the best in the country,” she said. “But we still need to find that leader who’s going to step up and lead this team.”

The Bruins will face cross-town rival USC in today’s semifinal matchup. The flame on the traditional rivalry was turned up several degrees in January, when Trojan Coach Michael Cooper cursed UCLA in a press conference following a game. The Bruins responded a few weeks later by routing the Trojans.

Both coach and players acknowledged that today’s game would probably be intense.

“We understand that SC is a team that’s very good at home, and we need to adapt to that because they’ll be very competitive here,” Caldwell said. “It’s about what we put on the floor tomorrow.”

Senior guard Erica Tukiainen added, “We have to execute our game plan and play Bruin basketball.”

Asked how she motivates her team, Caldwell said it begins with self-discipline.

“They won’t cheat each other by cheating practices,” she said. “They run their own practices, they do their own scouting reports, they watch film. It’s on them.”

“I tell them, ‘we coaches are done with our college careers. This is about you having your best career.'”

Caldwell said she makes practices competitive, with every drill having winners and losers. This increases player intensity. She also adds fun to the end of some sessions.

“They like it when we play dodgeball – they really do,” Caldwell said. “Days off are a motivation too.”

It’s about to go down (again)

So much to consume

Catching breath on a no-game day