Women’s coaches don’t need to be told about my second finding. They already know they can’t yell at girls or women the way coaches of boys and men do at them, or they wouldn’t have a team left.

Yet, often players and coaches don’t realize the importance of female team members – at the very least – coming to an agreement and at best, having love for each other. They don’t understand that good communication, getting along and being on the same page can literally make the difference between a winning and a losing season for a female team.

Bottom line: Girls and women need to talk it out. Build relationships.

In the midst of completing my Thesis, I was working with a high school girl’s basketball team that was going through a tumultuous season. There was tension, frustration, misconceptions between players – you name it. I sent them to dinner at this spaghetti place – by themselves – for a team meeting. Several hours, one good discussion and a few tears later, things were worked out and they were back to getting along well. They went on to place third in state.

I’ve seen and worked with teams that really needed a team meeting but wouldn’t have one. When you see players yelling at each other on the court, that’s not a good sign, and a coach that lets it happen should be reprimanded.

But I know of a team who had a meeting today, and it went well. Their issues weren’t gigantic, but they were stress fractures that, if not rectified, would eventually turn into a full break.

Two team members said, in the midst of it all, that they were “having for real communication.” But the good signs were afterwards when all emerged from the restaurant and stood in a circle for several minutes in the parking lot, laughing together. Successssss.

Venerated Los Angeles point guard Mykiea Russell, currently a sophomore at Umpqua Community College in Oregon, knows a little something about team meetings. She has called two this fall since players and several team newcomers arrived at school. She explains the reasons team meetings are important, and what such meetings do for players individually and as a whole, better than I could:

Mykiea: Team meetings are extremely important for good team chemistry. Good team chemistry leads to a successful team. Meetings can be confrontational, and they allow the team to communicate and express their emotions.

Females tend to take a situation and perceive it a certain way, make assumptions, and then are effected personally. Basically, things begin as misunderstandings and can turn into conflicts. Teams can become out of sync because individual perception varies with experience and goal orientation. Team meetings help people express their feelings and actual intentions and clarify what someone “thought” happened or “thought” she meant this or said that.

I insisted on having our first team meeting to basically inform the newcomers (everyone!) on what to expect at practices. I even put extras on it just so there were no dreadful surprises. It went well because it was informative. and I did all the talking and answering questions.

The second meeting was not so nice. We’d been beating up on each other for two weeks and there was a ton of tension and issues on and off the court. Sooo it was time for another team meeting.

A team is like a family, and I don’t know a family that doesn’t have issues at times. The meeting was pretty bad, but it did the job. Everyone let out how they felt, good or bad, nice or mean. When there were no more secrets, and by evaluating how people felt straight up, we had to re-evaluate our goals and figure out what we needed to fix for us to be a championship team.

A month later, a week before our first tournament, we were all friends and loved each other to death. We still have our moments where we argue and can’t stand each other (just like sisters), but without a doubt, we have each other’s backs and are willing to sacrifice our bodies on the court for one another.

Good teams play with each other, while great teams play “for” each other! Team meetings facilitate good chemistry, and in this case, a great team in the making. 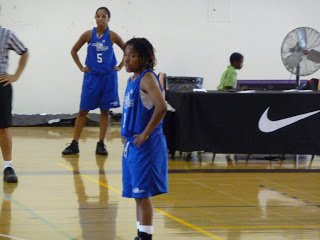 Mykiea Russell playing in the Nike Say No League this past summer, in Los Angeles. How did this kid get to be so smart?

If you’re a high school coach, you may need to call the team meeting. If you’re a college player, the task might be yours. But if it needs to happen, the sooner the better.

Does your team need to have a team meeting and work things out?

One more night, one more game

Twas the night before the Final Four