Coach Nikki Caldell said it herself: it was a balanced scoring attack with five players in double figures. And an interesting five players they were.

Erica Tukiainen began the first six minutes of the game with four silky three-pointers. She ended 6-8 for those shots.

Starters Doreena Campbell and Nina Earl were having off-nights, so Christina Nzekwe and Rebekah Gardner put in 11 and 15 points, respectively.

Freshman Markel Walker played more minutes than anyone, and had a double-double to show for it with 12 points and 12 boards. This kid is going to be big! Our section is really impressed.

I would get excited with 52.5 percent shooting if Hawaii weren’t so bad. They really didn’t have any defense to speak of. Hopefully the Bruins will find more of a challenge tomorrow night, when they play Utah at San Diego State. 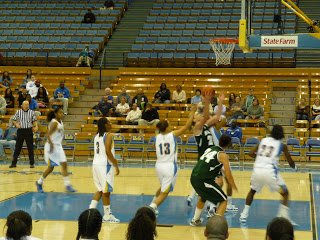 Hawaii on offense in the first half. 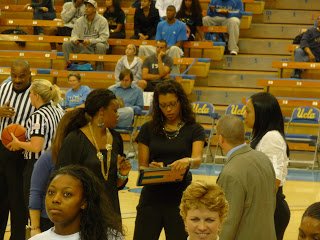 The Bruins coaching staff sometimes takes so long deciding what to say at a timeout that they pretty much run out of timeout. But they still kick booty. 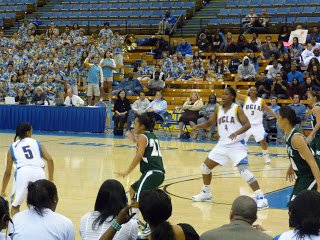 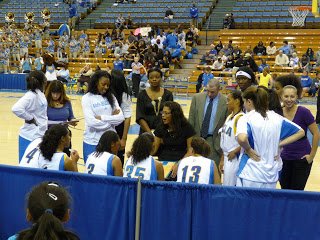 Coach Nikki Caldwell at a timeout when she gets to say stuff for a while. 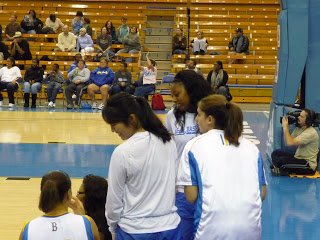 The injured Antonye Nyngifa would get up after a big bucket and walk down the line of her sitting teammates and high-five them. This is right at the end of one of those.