Home Uncategorized University of Tennessee: the view from the (direct) sideline 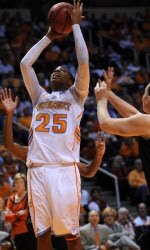 Glory Johnson goes up for a shot during the recent game against Baylor.

Again this year, Hoopism is pleased to interview respected scout.com reporter Maria M. Cornelius on the Tennessee Lady Vols. Cornelius is about as big an expert on the team that there is, as she attends virtually every team practice. The deep, detailed pieces she writes are legendary.

M.M.C.: The biggest question mark going into this season was how big of a leap would the freshmen make as sophomores. They spent late March and early April with a very disappointed Pat Summitt, whose reaction to the first round loss was to work harder.

They practiced, ran the ramp at Gate 10 at Neyland Stadium and flipped 150-pound tires across the indoor football complex, among other exercises.

When the spring semester ended, they were on their own to work out. They did.

Hoopism: How did the returning players look coming back? Especially the sophomores who were freshmen last year. Are they in shape, have they improved their games noticeably? How’s their enthusiasm and drive?

M.M.C.: For the most part, excellent.

Alicia Manning made a tremendous jump in overall strength and attitude. She went from somewhat bewildered as a freshman – something that could be said of all of them – to understanding how much work it takes to play big-time college basketball. She is an excellent rebounder and has provided some depth at point guard. With her size she can play on the perimeter or post up on the high block. She is a very versatile player who seems willing to accept whatever her role needs to be from game to game.

Glory Johnson is in a very good place right now mentally and physically. Last year her athleticism overwhelmed teams and they didn’t know how to guard her. Then, scouting film got circulated and teams come up with schemes to stop, or at least slow down players.

This happened to Johnson and she wasn’t prepared to adjust. She had played one way in high school – full speed ahead – and she continued to do so. In the off season she worked on her left hand, free throw shooting and her composure at the rim. She is now playing both under control and with high energy. It’s a tricky balance for anyone, and she’s getting it as a sophomore.

Also, as hard as it is to believe, she’s in even better condition. She was already the best athlete on the team. She is now trying to become the most athletic basketball player on the team.

Briana Bass did everything asked of her in the off-season. She worked on lateral quickness, shooting and raising her voice. Tennessee is using Shekinna Stricklen at point guard because of her size, but the 5’2 Bass will still play a role for the Lady Vols. She is a nice change-of-pace point guard who can enter when an opponent has started to tire a little and run the ball up their backs.

The key for Bass is to handle her new role and bring energy every time she enters the game. Pat Summitt will reward effort and it starts in practice for the coach. Bass has shown a willingness to work hard and be an excellent player in practice.

Shekinna Stricklen has started the season showing why she could be an All-American at Tennessee. She is quick, can shoot from long range, drive to the basket and rebound. She is finally comfortable at the point spot – a position she resisted a season ago – and seems to want the ball in her hands to open the game. She has an unflappable personality and seems to just love to play basketball. As Summitt has said, she has a chance to have a very special college career.

Alyssia Brewer is a supremely talented power forward/center who understands angles and positioning in the post. She also may be the teams’ best interior passer and is very effective on either end of the high-low game. She can fill up a stat sheet in points and will also get on the boards, but she must become a better defender and be able to run the floor for longer periods of time. Her practice habits still need to improve. If the switch flips for Brewer this season she could really help the team, especially with Vicki Baugh still out to rehab her ACL.

Amber Gray was the sixth member of the freshman class but will miss this season to rehab from shoulder surgery and recover from a stroke brought on by an aneurysm in her brain. She has re-joined her team on the sidelines at home games and attends practice. This season is a sponge-soaking one for her, as she will watch and listen to the coaches. It could springboard her into a better player – her goal is to return to the court – and will also help in her future plans to be a basketball coach.

Kelley Cain is a redshirt sophomore and is finally healthy after having surgery last April to remove two screws migrating out of her lower leg bone. The screws had been placed there in December 2007 in a complicated surgery to realign her right kneecap. She recovered well from that after a lengthy rehab, only to have the screws begin to move. That caused tremendous pain and she played last season quite hobbled.

She has started strong this season and is the centerpiece of the post game. A healthy Cain makes Tennessee a much different team.

Hoopism: What are the strengths and weaknesses of the freshmen, and how are they meshing with the returned players?

M.M.C.: By all accounts, the freshmen get along very well with each other and the rest of their teammates.

Faith Dupree, a 6’3 forward, was a teammate of Johnson’s in high school, so that eased her transition. Dupree has size and a deft shooting touch for one who looks like a classic post. She can step out and knock down a three. She is very coachable – that will earn points with the coaches – and arrived on campus fundamentally sound.

Dupree must work on becoming a better post defender – though she seems to already understand the concepts – and she also, like all freshmen, will have to get in better condition to play extended minutes. That comes with time and she already runs the floor pretty well for a big.

Taber Spani, a 6’1 forward/guard, has shifted inside for the Lady Vols while Baugh remains in recovery. Spani has deep three-ball range, so she plays a very untraditional power forward. She also will play minutes on the perimeter at small forward and can team with Stricklen and Angie Bjorklund to give the Lady Vols three long-range bombers.

Spani is fundamentally sound, coachable and willing to work as hard as any freshman since Nicky Anosike and Tamika Catchings were on campus. She arrived on campus with considerable strength and conditioning training and will build on that base at Tennessee. She will have to learn to defend inside – a new position for her – and absorb the intricacies of playing perimeter defense with the concepts of help, switching, et al.

Kamiko Williams is a tremendous talent with the ball in her hand and has the potential to be an excellent defender. But she spent her first 14 years in Germany – where she said fouls were rarely called and players could grab and hold each other – and is behind on defense. She also is adjusting to playing for a coach as demanding as Pat Summitt. But she has the skill set to help the team this season and once she gets up to speed in terms of terminology and understanding that Summitt puts a premium on daily practice performance, she will be fine.

Hoopism: Who is emerging as a team leader(s) this year?

M.M.C.: Angie Bjorklund has been vocal from day one. Summitt has asked Stricklen ro raise her volume. Cain is also showing signs of being willing to talk on the court. It is definitely leadership by committee – Taber Spani will talk, too – but Angie is the most consistent in terms of talking. She is leading on and off the court, and team seems to respond to her. She also knows the offenses and defenses better than anyone so she needs to be the QB, so to speak, on the court, and she has shown signs of being willing to do so.

Hoopism: What are Pat and company emphasizing in practices right now? How is this different, if at all, from last year when there was such a number of frosh?

Last year there were so many new players that had to learn everything. So practice was consumed by teaching, demonstrating and re-teaching. This year, with just three freshmen, there is a lot more action on the court as the returning players know what to do and the three freshmen can watch, learn and execute. Last year’s freshmen didn’t really have that luxury – there were sometimes four of them on the floor at one time and they learned on the spot – but the three newcomers are able to mesh with returning players

Hoopism: How did Nicky Anosike contribute to practice sessions during her recent visit?

M.M.C.: Nicky Anosike was a godsend for the team. She is so tough inside and she gave Kelley Cain a big, strong body to go against in practice that knew the Lady Vol system so well. Anosike has since left for Romania to join her pro team, but she made a difference during her time here. She also hung out with the players off the court, so that was beneficial.

Hoopism: Does the team seem to be on a mission to avenge their first-round loss last year?

M.M.C.: Yes. As Summitt said, they were embarrassed by what happened and it showed in the off-season with their commitment to work out with Heather Mason on a voluntary basis. They heard from former players, fans and the coaches and they know that they represent the long orange line, and expectations are so high. They seem to have bought into the Tennessee Way. They remain young, but they are much more mature than a year ago.

Hoopism: Any uncertainties going into the season?

M.M.C.: The one question mark is the status of Vicki Baugh. If she can play this season, Tennessee becomes an automatic contender. She is that good inside and would combine with Johnson and Cain to give Tennessee a big frontline.

But she has had two ACL surgeries on her left knee in one calendar year so the approach has been one of extreme caution. She will practice on a limited basis at times, but has not been cleared to play. The Lady Vols are a much improved team from a year ago. Baugh makes them even better. But it is not yet known if she will play this season, and that decision likely won’t be made for a few weeks. She must first be able to practice full-time and then evaluate how the knee responds.

Her spirits seem to be high, and she is vocal at practice, even on the sidelines.

Overall, the future is very bright for the Lady Vols. The current players get it, and recruiting continues to be top notch with the signing of guards Lauren Avant and Meighan Simmons from the class of 2010.

Tennessee is getting back to looking like Tennessee – pressure defense, dominant board play and a team that competes every game.

Heading into the weekend with much to read

Looking ahead to the Sweet 16