I’d like to present the 2009 MCF (Most Classless Fans) Award to the busload of Phoenix Mercury fans who came in for the game last night. With a few seconds of the game to go, several brandished and hoisted “Beat LA” signs and began chanting the same thing, very loudly.

“Beat LA! Beat LA!” they screamed, waving their signs. Fans in Pauley Pavilion booed them, but they kept on chanting. After the final buzzer sounded, they high-fived. I’ve not seen anything that brash and disrespectful before. Storm fans used to take road trips and yell and scream in the opponent’s arena, but never taunted the crowd afterwards when the Storm won.

Sore winners are so distasteful.

Phoenix was already my least favorite WNBA team. Now I see they have the fans to match. 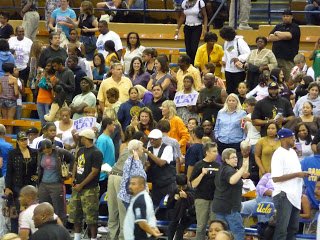 The straw-haired woman in the orange shirt was particulary happy about her chant and her sign. 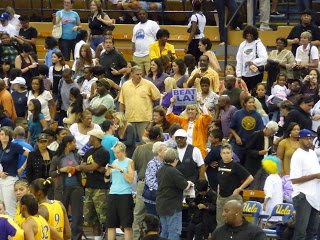 The funny thing about this picture is that Sparks co-owner Kathy Goodman, far left, was sitting in front of them and didn’t seem to care at all.

The night before the season starts!!