All the Sparks’ spirited comebacks made last night’s game fun to watch. Each time LA fell behind by 6 or 8, they stopped things before they got out of hand. It was a good team effort overall, although I wish Marie Ferdinand-Harris had played.

Candace Parker’s one-handed put-back was the play of the day on wnba.com, to the surprise of no one who was at the game. It was quite something to behold, but it is CP after all.

One non-game note: as I walked up to the Staples Center entrance before the game, I came up behind a tall guy surrounded by a small group of fans, just as one woman said, “are you ready for the Lakers?” I didn’t know who it was. But during the game they put the camera on Ron Artest, who was sitting courtside. I guess that was him outside.

There are a few Sparks players who I won’t name who don’t seem to be in a very good mood when they leave the floor, no matter what the game result. One athlete in particular used to look up at the fans, waving and smiling as she passed through the tunnel, but looks down now and never up. I hope she’s allright.

Friday’s game will be a tribute to retiring Lisa Leslie. But the Sparks better remember that it’s also Delisha Milton-Jones’ birthday. 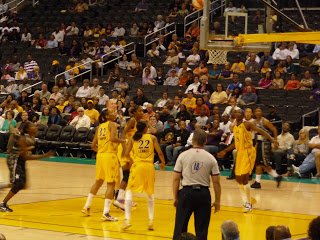 Sophia Young misses a shot in the first quarter. It’s always great to see that happen. 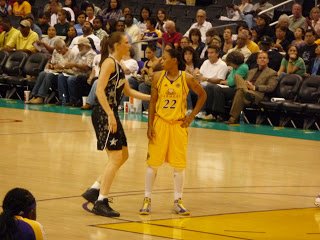 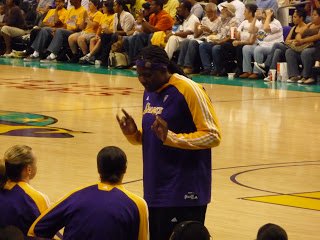 Vanessa Hayden doesn’t play anymore, but she’s sure fun to watch on the bench. 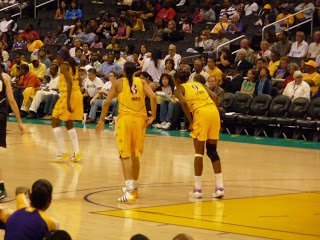 Here’s a sight you won’t see too much longer. 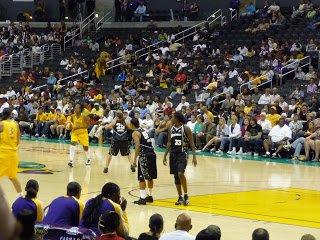 Noelle Quinn started at point last night and ran it pretty much the entire game. 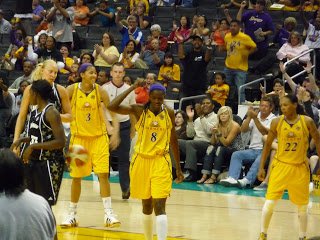 The reaction after Lennox drove, scored and was fouled. Delisha Milton-Jones pumped her fist. 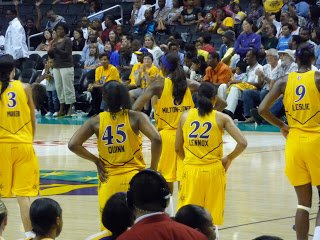 The ending five walk back out after the last timeout of the game. 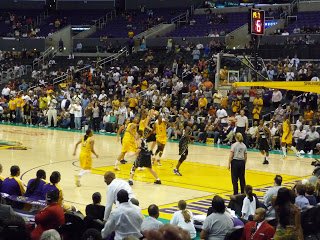 In the closing seconds, the crowd was on its feet chanting. 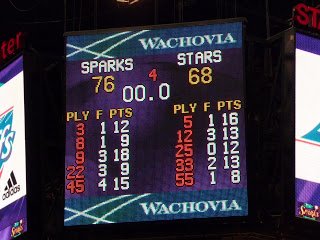 Playoffs, people. Who woulda thunk it just a few weeks ago.