Another unecessary loss last night for the Sparks. There was no rebounding going on, and they were again resorting to outside shots instead of taking it to the hole. But the Sparks still had the game in the end – they just let it slip away.

Team co-owner Kathy Goodman asks “what is it with Atlanta?” Lisa Leslie was taking the blame herself. Whomever tweets on behalf of the LA Sparks twittered last night after the game: LA_Sparks Devastating loss 2nite… We gave the game away, senseless turnovers, we didnt box out, left people wide open… Prac 2morrow, SA Friday!

This is why we need a bigger league: mediocre teams wouldn’t be in playoff spots.

I’d be more upset by all these losses if I felt as connected to the Sparks as I did last year. In 2008, the organization had numerous opportunities for fans to meet and see the players. This year those chances have been scarce.

They had the player picnic last month only for season ticket holders who had fully renewed for 2009 by Sept. 30, 2008 – two days after the Sparks’ devastating loss in San Antonio. Who was thinking about renewing at that point? I heard that the players stuck to themselves during the event and barely talked to fans, too. I was glad I wasn’t invited after all.

There have been almost no post-game autograph sessions this year. And tonight I got home to see a tweet by the LA Sparks that there had been a player appearance at the ESPN Zone from 5-7 p.m. I went back and checked my email, but there was nothing sent to MVPs about that.

It’s an inevitable fact that when a franchise gets going and/or new owners take over, there are more perks, and that those opportunities slowly dissipate as the years go by. But I think the Sparks should re-establish more of a connection with their fans. If they did, I bet what happened last night wouldn’t happen again: when I got up to leave with 15 seconds to go, I turned around and saw that everyone in the eight rows behind me had already gone. 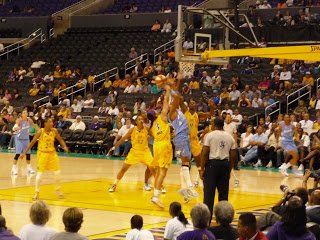 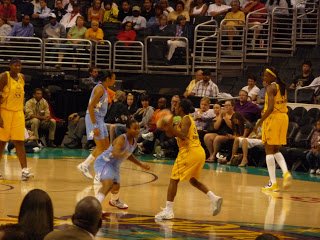 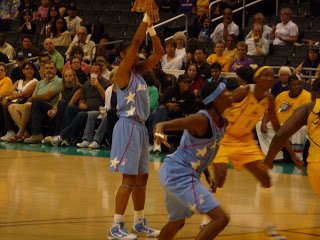 As Angel McCoughtry releases her second FT shot, Michelle Snow is more than ready to go. 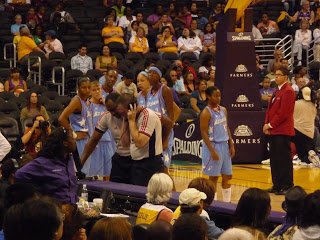 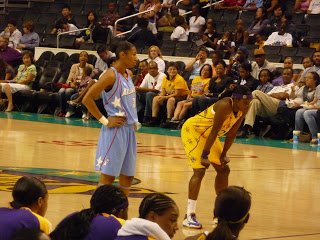 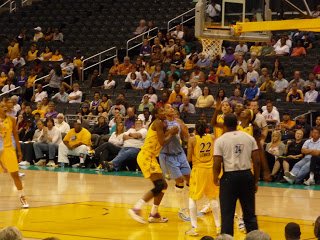 Lisa Leslie and DeSouza try to box each other out. 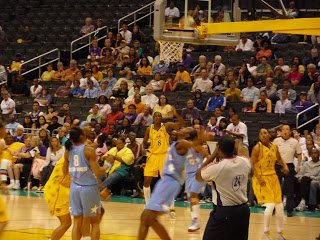 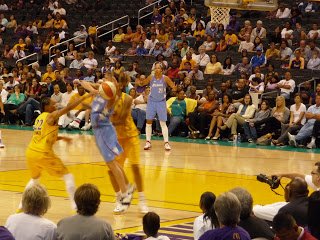 Betty Lennox and Tina Thompson put the hurt on Coco Miller in the fourth quarter.

Beyond the game – women, sports and competition