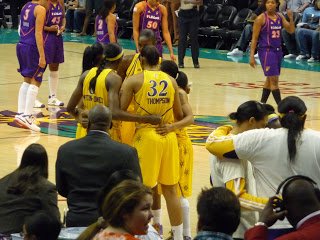 The starting lineup was the one I’d been dreaming about: Lennox at the 1, Quinn at 2, Milton-Jones at 3, Thompson hanging on 4, and Leslie at 5. But that lineup stayed in for only a few minutes before substitutions began. 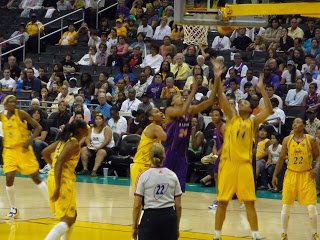 Lindsay Wisdom-Hylton (14) was one of the first substitutions, which surprised me. Above, she battles DeWanna Bonner under the hoop. 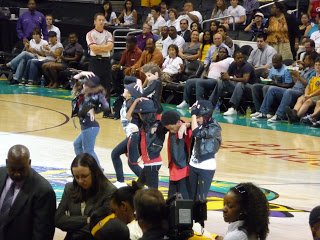 The Spark Kids did a tribute to Michael Jackson, who’s birthday is Saturday, during a timeout. The kids have mad skills. 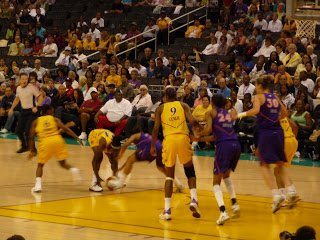 Lots of scrambling in this physical game. Here, Marie Ferdinand-Harris fights with Cappie Pondexter for the ball. 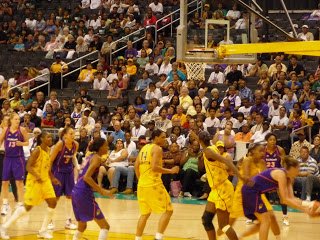 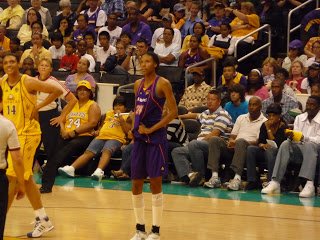 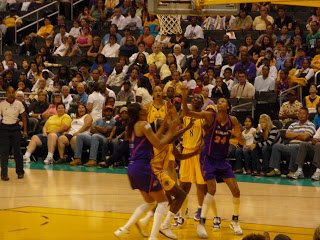 Both teams fought hard in the fourth quarter, but the Mercury squeaked it out. 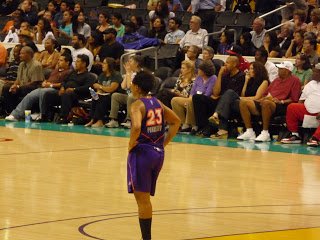 I’ve never seen Pondexter with the ‘do she was sportin last night. She played like an animal.

The Sparks tried, they really did. No one could fault them for not finishing, because they left it all on the floor – especially Lisa Leslie and Betty Lennox. But when you’re missing Candace Parker, you’re missing a lot.

Before I’d left for the game, I saw Parker’s twitter that her daughter was sick, indicating how worried she was. So when I got to Staples Center and saw she wasn’t on the floor, I knew what was wrong. Mechelle Voepel summed it up well. Co-owner Kathy Goodman was philosophical.

Much of it was a slugfest between the two teams. Lookit all the fouls on both sides. Then there was the score; the Sparks haven’t put up that many points since the last time Phoenix came to town. This tells me that LA plays to the level of the other team, which has disturbing implications.

The Sparks players who get the most applause when they come out are, in no particular order because there is none: Shannon Bobbitt, Marie Ferdinand-Harris and Betty Lennox. Crowd favorites, one and all.

Finally, I’ve been impressed with the size of the Staples crowd the last several games. Almost 10,000 last night.

Close, but no upset

More W news than can be believed