I haven’t really said anything yet, but I’m going to now. I’m so disappointed with the Sparks season. I’ve not been able to watch them online for away games in weeks. When they won against Minnesota last week I heard about it later, because I wasn’t watching. Today’s loss was just so unnecessary. It was a minute to go when three people bobbled a chance at a basket, and the game was gone. I was sitting next to a fellow educator today, and we both just threw up our hands.

I’m not even going to speculate. It doesn’t get me in the heart like one of my kid’s games does. The ones I feel most badly for are owners Kathy Goodman and Carla Christofferson. In a way, they’ve been gipped a little bit each season since they bought the team.

Bright spots are that Candace Parker earned her fourth double-double in the last five games, with 11 points and 10 rebounds. Noelle Quinn was hot today, with 13 points off 6-10 shooting. And Vanessa Hayden is a helluva cheerleader from the bench.

Lovin the screaming kids, too. Some get real negative about the camp game, but it’s one of my favorites of the year. The kids act the way the Staples Center crowd should act every game – screaming and yelling, jumping up and down and responding to crowd prompts. The usual crowd just sits there, quiet as mice.

A final bright spot was that one of my girls go to meet one of her favorite players at the ESPN Zone after the game. Shannon Bobbitt made an appearance and played a few games with some fans, including my kiddo. She reported that Bobbitt is “REALLY cool.”

Question: why is Marie Ferdinand-Harris in the dog house? No minutes today, which follows a trend of late. 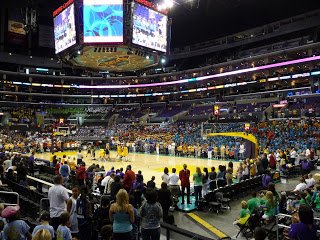 Lookit all those cute campers!! They were nice and loud. 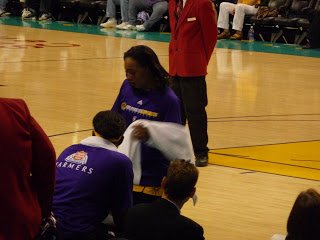 Betty Lennox wore her hair down for the game. And though she suited up, it was obvious she wasn’t playing. 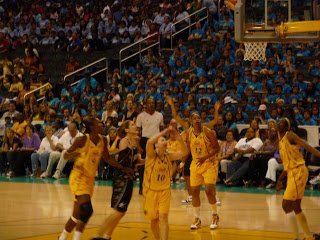 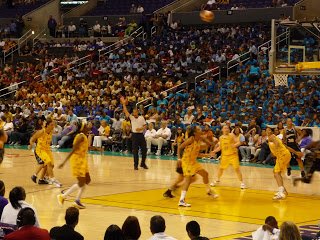 Everyone watches after Becky Hammon unleashes a shot. 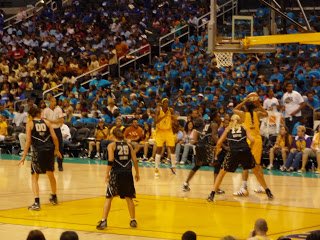 Candace Parker looks to pass the ball in the second half. 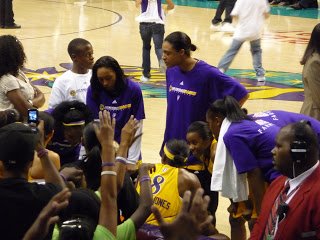 Betty tried to pump the team up late in the fourth quarter. 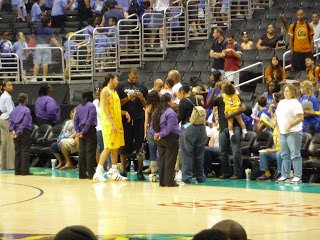 Candace goes over to greet “Debo,” seen in the white shirt, holding daughter. Shelden Williams is next to Candace in the black.

News pulling no punches this morning

Are you ready for this National Championship game?

Not your average Monday