Most of the LA Sparks took over the Trader Joe’s in the LBC for a couple hours this afternoon, and just like last year, a good time was had by all.

Team members were put into one of three groups, and they rotated between three stations: the salad bar, bagging groceries and the autograph table. This year the rotations were a lot more loose, and the players didn’t stay behind the salad bar but circulated handing out plates. After a while it seemed that certain players were more comfortable in certain places, so they’d drift back to the area they liked.

For example, the outgoing Shannon Bobbitt liked circulating, so she handed out salad for a long time (see below photo). Ditto Vanessa Hayden. Betty Lennox, on the other hand, went back to bagging groceries after a short time pimping the lettuce. She had good-naturedly smiled and shook her head when I said hi to her the first time she was bagging – kind of a “the things I have to do for my job” look on her face. Candace Parker bagged groceries first and then spent the rest of her time signing autographs, even when she was the only one left at the table. (She “tweeted” earlier that her young daughter had been up all night crying and so neither of them had slept.)

Lisa Leslie and Tina Thompson were absent. A Sparks staffer said Leslie was receiving therapy for her knee and was really bummed she was going to miss the event for the second year in a row. No word on why Thompson wasn’t there.

I got to talking to a customer and ended up convincing her to come to a game. Several people showed up for autographs, and some customers didn’t know what was going on.

I’m a Vanessa Hayden fan now. I mean, I was already halfway there because she’s been surprising me all season long with her play. After talking to her today, I could kick it with her at a barbecue. She’s good people. And funny, too.

She was asking me what time it was by an hour into the event, and asking me what time banks closed. Thirty minutes later she emerged with her huge purse, her free Trader Joe’s stuff (they all got to pick a free item after their “shift”), and told the staff by the front door that she’d been given permission to go. She walked out the door and two staffers followed her. I still have the image in my mind of her turning to them, her hair blowing in the breeze as she walked through the parking lot, saying, “I’ve gotta go pay my mortgage!” The staffers came back into the store.

The entire team, as well as Coaches Cooper and Assistant Marianne Stanley, were on sort of a low ebb. Who can blame them, though, after coming off of a month on the road. I told Cooper I’d almost forgotten what they looked like. 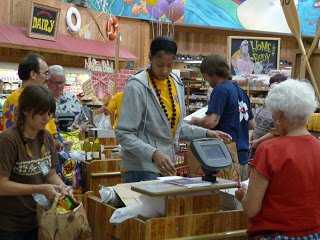 Candace Parker bags groceries in her trademark head wrap, as well as a lovely string of beads. 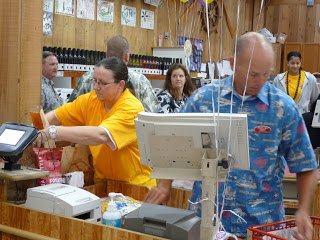 Coach Marianne Stanley is a serious woman, but somehow still has a twinkle in her eye all the time – even when bagging. (With CP in the background) 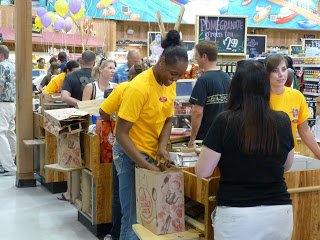 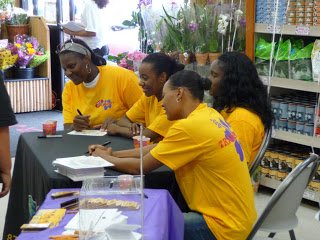 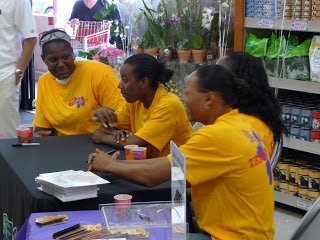 Here’s a common scenario for the Sparks: Bobbitt has just made a wise crack. Hayden is giving her the “girl, you crazy!” look while Ferdinand-Harris blinks and Lennox busts out laughing (anyone see this story about happy Betty?) Bobbitt and Delisha Milton-Jones are about as silly as it gets. The team jokers. 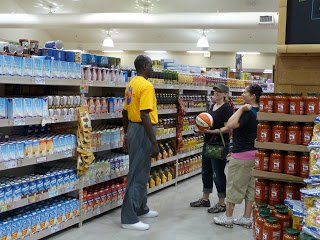 Coach Michael Cooper wasn’t as aggressive at the salad bar as last year, but he did a good job of working the crowd. 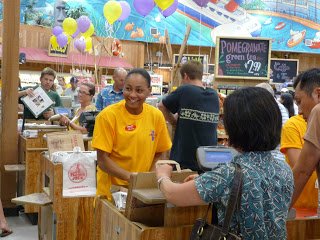 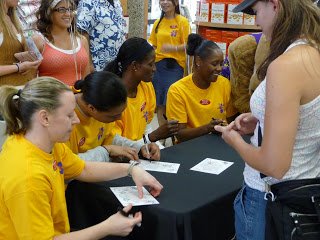 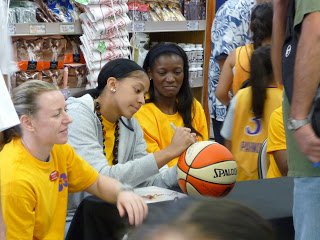 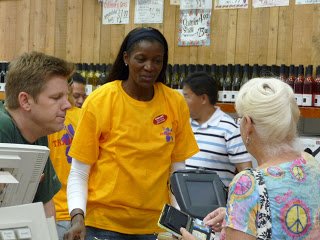 Milton-Jones talking to a customer. 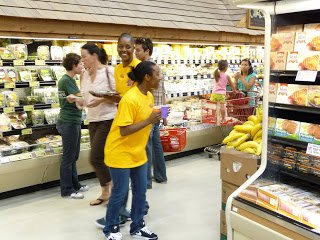 Quinn and Bobbitt hustling the salad. 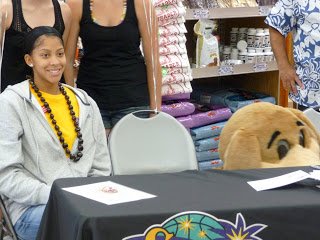 When CP first sat down for autographs, Sparky the Dog was in her seat, and she kicked him out. She sat there for a long time, probably because she was tired as hell from her daughter crying all night (so said her twitter page today). The Sparks camera man came up to get a pic and Sparky ducked so he was just peeking over the table. CP just sat there flashing her pearly whites. We all giggled.

I left TJ’s and went next door to Pickupstix. I was in line and someone tapped me on the back. I half turned and a very tall man with a deep voice asked me if I’d ordered yet. It wasn’t until we’d both ordered and he’d sat down, his little girl on his lap, that I saw his face. Very distinctive face and voice that I thought I remembered…….

I was pretty sure it was “Debo,” aka Tom Lister Jr., from the “Friday” movies, but I wasn’t sure. He was on the cell phone by then so I didn’t ask. But as I was pulling out, I saw several of the Sparks players standing talking to him on the sidewalk. It was him.

Here he is with his little girl who was with him today. You just never know who you’re gonna run into in the LA area.

Day 3 of the bubble