I watched some more Bruins play today: fresh-faced Rebekah Gardner and the ever-friendly Nina Earl. They’re on T.E.A.M. ’09, which is coached by Onye Ibekwe – not sure how he’s related to graduate Chinyere, but he is. 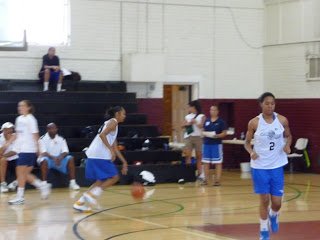 Bruins in the house: Rebekah Gardner runs toward the hoop during warmups while Nina Earl jogs from it. 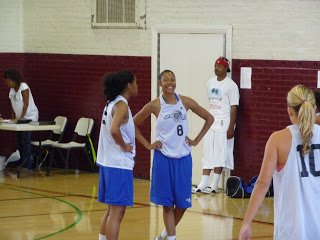 Earl and Gardner chattin it up between warmup free throws.

The rosters of these teams are interesting. Azusa Pacific has two teams in the league that consist only of their players. Cal State Dominguez, Cal State LA, Cal State San Bernardino and Compton Community College also each have a squad. The rest of the teams are a mix of D1, 2 and 3 players, JC players, graduates, “undecided”s and those who graduated a loooong time ago.

H&S is full of “undecideds” and grads. Probably the most notorious grad is former Trojan Jessica Cheeks, currently an assistant to Colleen Matsuhara at West LA College. Cheeks, who plays in a lot of leagues around LA, will turn 28 in a few weeks. You can’t take the love of the game from some players………….

The woman in charge of the league said the schedule was delayed in getting up on the website, but that it will definitely be posted this week.

Organization has petition to “save women’s athletics at Tennessee”