I know what happened – I just don’t know why. Other fans from my awesome section are similarly perplexed.

The Sparks seemed to abandon their “reboot the season” plan to play killer defense, and in the last half of tonight’s game they weren’t boxing out at all. The box score says Phoenix out-rebounded LA 40-31 (15-6 team rebounds), but frankly I’m surprised it wasn’t a wider margin.

Then there was the lack of offense. The numbers don’t look bad; 43.8 percent shooting is respectable, and they kept the turnovers low at 11. But the Sparks just seemed to lack offensive rhythm and cohesiveness. One of the season ticket holders who sits behind me aptly commented during the fourth quarter, “They just look confused – like it’s the first game of the season.”

It’s one of the most frustrating situations for fans and one of the most agonizing for players: when a team has all the talent in the world but isn’t, for whatever reason, putting it together. I really hope the Sparks can turn it around soon, but as Daniel said before leaving tonight, they’ve dug themselves an awfully big hole.

– Saw DeWanna Bonner’s dad outside Staples Center before the game, and he remembered me from the Final Four. He said his daughter has found the perfect team for her in the Mercury, and she and the whole family are pleased. Good deal.

– The music for the Sparks kids has improved. Just last game I was complaining to one of my seat partners that the kids were dancing to “Yeah” from 2003, and tonight they rolled out some new routines complete with new tunes. Very nice! Now if they could change the music they play while the team is on the court, and during timeouts.

– The guy who replaced the annoying rollergirl had a replacement tonight, and she was the best one yet. We think they should keep her, because she has just the right amount of enthusiasm in her voice without being over the top. She is also louder than the man, but not too loud.

– Nice piece from the Daily Breeze on Candace Parker’s return, but women will never get credit for having kids that’s equal to the attention men get, even when they’ve been suspended for drug use.

– And speaking of CP, it was just damned nice to see her out there, even if she was a little slow and not quite in her rhythm. Six points, four rebounds, two assists and one turnover is not bad for being gone for 10 months.

– Diana Taurasi was very focused and serious tonight, and put up 20 points. No antics, no jawing, no spitting, no standing halfway on the court when she’s not playing, no faces at opponents or officials. Just all business. 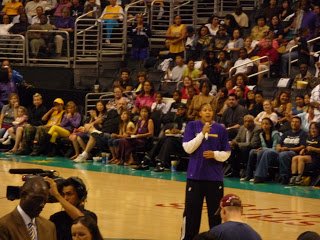 Unsurprisingly, Candace Parker did the pre-game welcome duties on the mic. 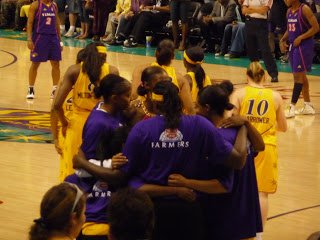 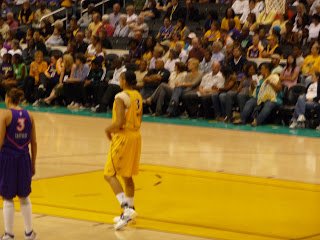 CP took the court at the 5:35 mark in the first quarter, to standing applause. 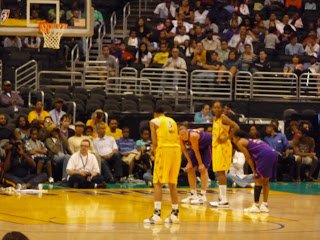 CP at the free throw line. 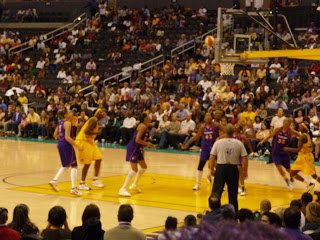 Action in the third quarter. 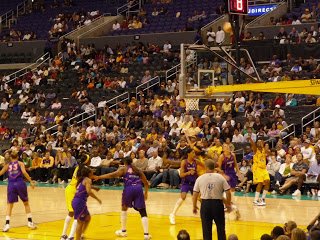 The pummeling continued in the fourth quarter.

The Sparks are now on the road for a month, and fans will not see them again until August 6.

Edit to add: Kathy Goodman blogs about the game.

Anosike to have surgery, will miss six weeks; Parker and Catchings...