Both teams got off to a slow start today, but Sparks guard Betty Lennox ignited her new team with two quick baskets from the left corner, and two steals. Then Tina Thompson started getting into the act. Between them, they were ridiculous; Lennox with her quick drives, and Thompson with her long, sweet shots. Lennox finished with 17 and Thompson, 18.

Noelle Quinn came in at the end of the first quarter and hit two quick jumpers. Then at the start of the second quarter, Vanessa Hayden started doing damage with two baskets of her own. Her second bucket put the Sparks up 30-18 at 8:19, and LA never looked back.

Deanna Nolan (15 points) and Taj McWilliams-Franklin (12 points) tried hard for the Shock, but the Sparks are just so deep this year. Starting point guard Kristi Harrower, 35, was even blocking shots if she wasn’t stealing the ball. LA lead 51-29 at the half.

The third quarter was worrisome, as Nolan began with a 3, and the Sparks looked sluggish. Visions of last season started popping into my head, but in the fourth quarter, guard Marie Ferdinand-Harris came off the bench and started hitting. She looks much more sharp than last year, and finished with 7. Hayden had 12 and Quinn, 8. Lisa Leslie didn’t have her best game, finishing with 6 points.

Overall, I was very pleased. Last year’s Sparks had trouble playing 40 minutes because they couldn’t hang, and one minute they’d be there and the next, they wouldn’t. Today I saw a similar lapse, but it wasn’t because the Sparks weren’t capable, as was the case last year. It felt like they are still learning each other and the systems. If they can kick the crap out of the defending champions with a half-staff Lisa Leslie and no Candace Parker, just think of what the end of the season will be like.

For now, the Sparks really need to work on boxing out. That’s the only thing that was really glaring to me and those in my section. The offense is coming right along, and the defense isn’t far behind it.

At the end of the first quarter, Thompson and Shock forward Plenette Pierson went down under the basket in an incident that was freakishly similar to an injury Pierson sustained in a game last season. And just like last year, there is now a “controversy” around who was at fault and who did what to whom.

You be the judge

It’s too bad that some always like to assume the worst about others, and that bad intentions are the norm. But what would sports be without some drama? It’s part of the reason why some watch.

Quote of the day from thesixthwoman, on twitter: “Why does Plenette keep getting flipped over?”

I wonder that too.

On the Farmers uniforms, I guess I don’t care. I sit in the eighth row, so when you’re watching them play, you’re not looking at the name on the jersey. The team shop was still selling stuff that said “Sparks” on it today, so I’m happy.

Cute moment: late in the game, a Shock player was at the line for a free throw. Former college teammates Bobbitt and Alexis Hornbuckle leaned toward each other, shoulders together, and said a few words. I tried to catch it on camera, but the second shot fell and they were off again.

My thought: Go Betty! So nice to have you in the house, girl. Thompson too. By the way, Lennox is 32 and Thompson, 34.

My other thought: It was great to see everyone again, from the other Staples Center regulars to the ushers to the staffers. The first day of WNBA season is always like a family reunion. Lotsa hugs.

Barring major injuries, I don’t see anyone else beating the Sparks for the big trophy with the ball on top this year. 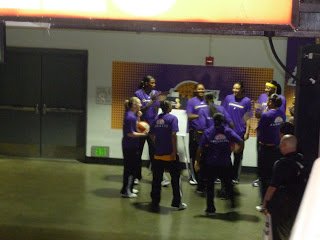 Kiesha Brown isn’t there to lead the “whoops” in the tunnel anymore, but they did allright on their own today. 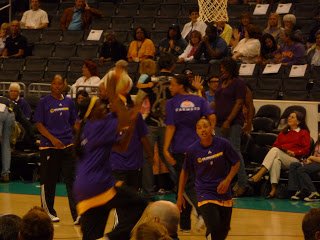 Delisha Milton-Jones takes a shot while Betty Lennox cuts to her spot. 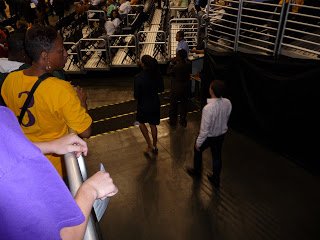 Candace Parker makes her entrance during team warmups. Wherever she goes, people ask, “where’s the baby?” It’s kinda dumb when you think about it. The baby is only 24 days old. 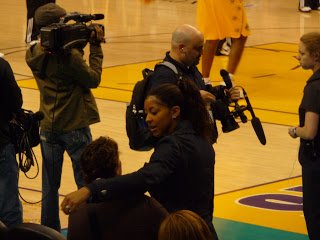 CP gives somebody a hug. 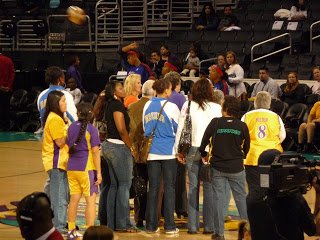 Before the game, Sparks co-owners Kathy Goodman and Carla Christofferson gathered a group of Lovedy Brydon’s friends and family on the court to pay tribute to the long-time Sparks and UCLA fan, who died April 26. In the spot where she used to sit, at the back of my section, was her wheelchair, decorated for the occasion. 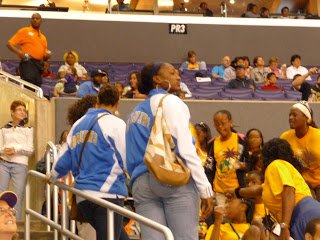 Bruins Erica Tukianien and Moniquee Alexander strode up to the Staples Center in their bold blue jackets about 10:45 a.m. They are very friendly, and made their way around the arena saying hello to fans. UCLA Coach Nikki Caldwell and assistant coach Tasha Butts were also there. 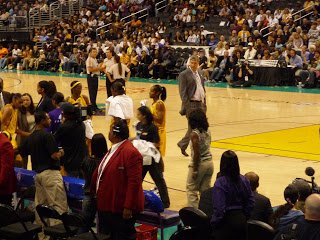 Claims were made on the rebkell message board that Sparks fans were cheering Shock forward Plenette Pierson’s injury. LA fans are entirely too quiet and complacent for my taste, and I didn’t hear any of that. But they did boo Shock Coach Bill Laimbeer, who strode over to where Pierson was lying on the floor (above), took a look and then doubled back and approached Sparks Coach Michael Cooper to give him a piece of his mind.

I wouldn’t have done that. 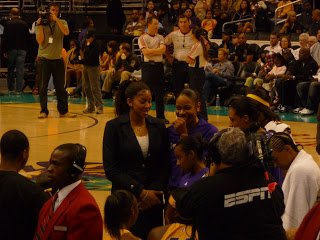 The new trend of all the coaches huddling to talk before they talk to the team gives teammates/friends a chance to giggle. 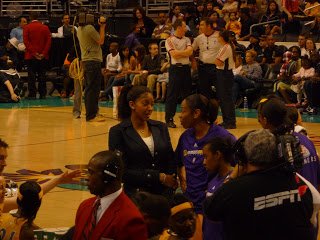 CP and TT are homies. 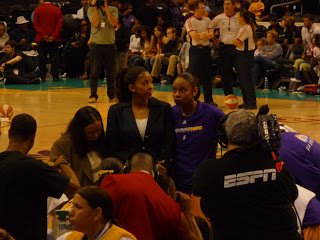 And they even do the serious faces together. 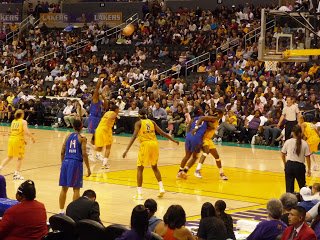 During second half play. Yes, just about everyone hooks arms at some point during games. 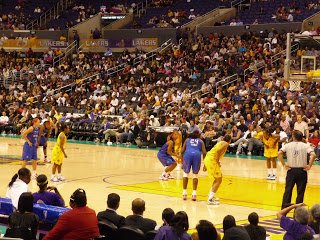 Shannon Bobbitt (far left) and Lindsay Wisdom-Hylton (near right) got in at the end of the game, and each had some nice moves. 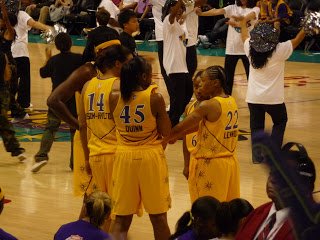 The last huddle of the game was very animated, with Lennox and Bobbitt doing all of the talking and gesturing. (It’s a Sagittarius thing)

Nothing shocking, everything interesting

No upsets, but a lot going on