The game was Saturday at Washington University in St. Louis. Many people, including myself, went to the Scottrade Center to see the college team open practices, then quickly hopped a shuttle to go see the high school game.

It was a star-studded event, both on the court and in the audience (I’ll get to the audience part in a separate post in a little bit). And it was a good game. Here’s a nice summary of what happened:

Unfortunately, Brittney Griner didn’t dunk in the game. But she brought the crowd of almost 3000 to silence during pre-game warmups. Each team lined up at their respective baskets – the blue team to do layup drills. But Griner used her turn to dunk the ball, five or six times in a row.

She doesn’t seem to exert much effort in the dunk, and why should she? Griner is 6-foot-8 with an 86-inch wingspan. She doesn’t have to get far off the ground to do the damn thing.

Her first dunk went “CLUNK!” with the unmistakable sound of a rim being contacted. The crowd, which had been chatting, fell quiet.

The cameras were out and people were staring and whispering.

It was really something. And I tried to take photos of the spectacle, but they turned out blurry.

One thing that was interesting was that Griner wasn’t nearly as aggressive as I’d imagined her to be. Maybe she wasn’t used to playing against that caliber of player before, but for the first part of the game, she seemed out of sorts. And at the rim, Griner has a soft touch. Not exactly what I was expecting. But she’ll do just fine in college playing with Mariah Chandler, who was also her teammate on the blue squad. 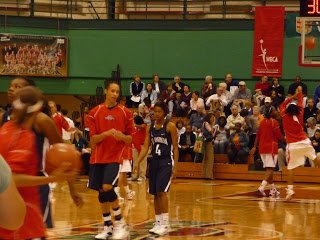 Both teams warm up at their baskets. Brittney Griner (middle) walks up the court. 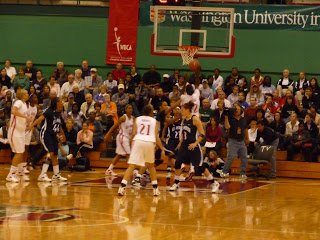 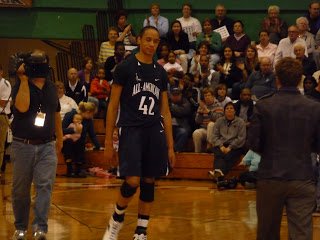 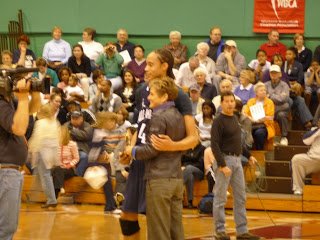 ….and standing next to an average-height person, her height makes a statement. 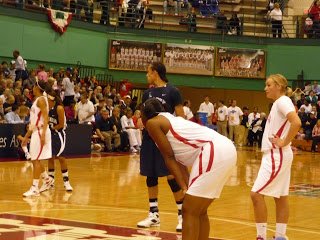 Skylar Diggins, Layshia Clarendon, Griner, Kelsey Bone and Joslyn Tinkle all wait for the ref to get his ish together so Griner can shoot a free throw. 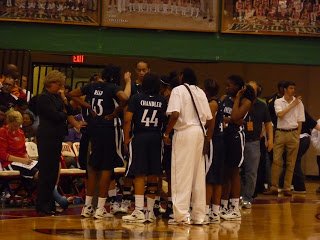 Yolanda Griffith (in white) was the honorary co-captain for the blue team. 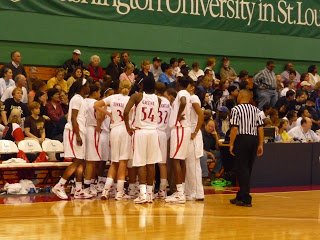 Tina Thompson (far right in white) was the honorary co-captain for the white team.

Youngins in the news