Brea did it – they took on the dragon and they won. The matchup that everyone had been waiting for all year was surprisingly one-sided, as the Wildcats dominated the number one-ranked team from beginning to end, and handed them their first loss of the season when all was said and done.

Senior guard Jonae Ervin lead all scorers with 18 points in a gutty performance that saw her do everything from drive to the basket for the layup to steal the ball to sink crucial free throw shots. Ervin told OCvarsity.com that “this is the game to prove we are the better team, and we proved it.”

Indeed. She was named MVP of the game.

Both teams looked nervous to start the game, as a veritable turnover fest ran for the entire first quarter and most of the second. But what did it for Brea was their defense. Though shorter and smaller than the physical Monarchs, the Wildcats played suffocating defense and double-teamed Kaleena Mosqueda-Lewis on every possession. The sophomore sensation was held to just four points on the day. 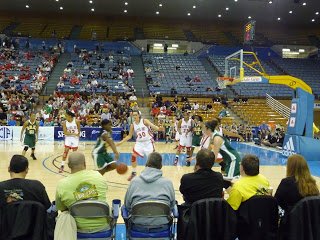 Brea sophomore guard Alexis Perry takes it up the right side. 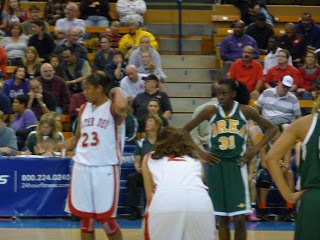 Kaleena Mosqueda-Lewis and Janier Olukemi line up for a free throw shot. 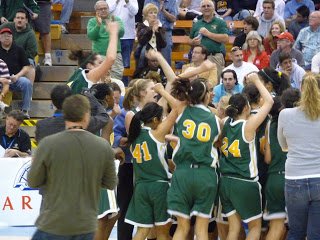 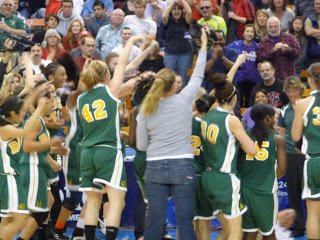 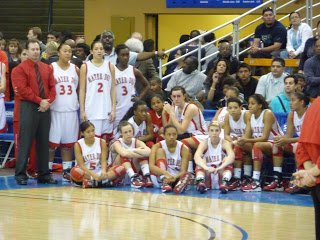 A subdued Mater Dei prepares to accept their second-place award. 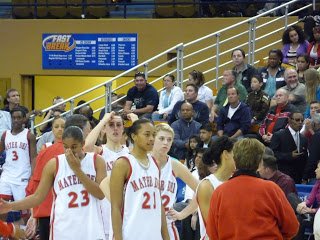 I ended up sitting in front of the former attendance secretary at Brea (25 years before retiring a long time ago), whose crew was pretty amusing. They were gracious about their opponents, and the husband of her friend said with a shrug, “Brea will enjoy it now, because Mater Dei will be untouchable for the next several years.”

He’s right. Mosqueda-Lewis and Vailotama are both sophomores, and another of their top players – Jordan Adams – is only a freshman. Once they get some more playing experience under their belts this summer and next year, it will be lights out for other teams.

Both Brea and Mater Dei have great team composure. There were times on both ends where referees made calls players disagreed with, and several kids had their mouths open to say something, or their faces scrunched up into anger, but then they put themselves in check. I respect that; they’ve had good coaching.

Former secretary waxed on about Brea Coach Jeff Sink – not on the court but in the classroom. She said he is a heckuva history teacher, and doesn’t hesitate to break something or rip something up to make a point. This doesn’t surprise me.

“And the kids learn!” she said.

She and I were walking down the stairs when Sink came, and hugged her right next to me. I thought about saying something, since he’d posted on this blog, but…..naw. It was his moment.

On to Arco Arena Friday for the Wildcats.

A non-game day can’t stop the news from flowing

Time to get off the stage