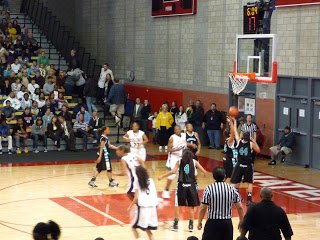 Canyon’s defense kept them within at least 10 until about five minutes to play, when Colony stepped on the gas. The main reasons why were senior forward Jazmyne White and senior forward/center Camille Buckley. The two made a nice tandem, switching off between outletter and scorer. White finished with 12 points and Buckley, 30. Junior guard Te’onna Campbell added 17.

Edison deserves kudos for playing with so much heart and intensity. In a smaller pond, they’d be a dominating basketball team. But in the end, they were no match for Brea, who has waves and waves of skilled players.

Brea’s Jonae Ervin is such a hustler. She finished with 12 points, and I’d love to see the rest of the stats. She was everywhere. Junior guard Kelsey Harris started going off in the fourth quarter. I counted four threes…..again, I’m looking forward to when the stats are put up on maxpreps. Sophomore Justine Hartman added 10. 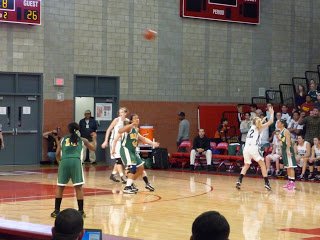 Senior point guard Jonae Ervin lets another one fly, for the bucket. She finished with 12 points. 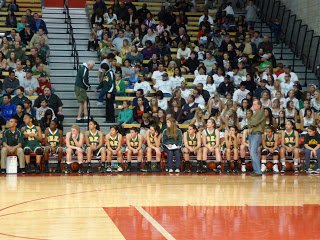 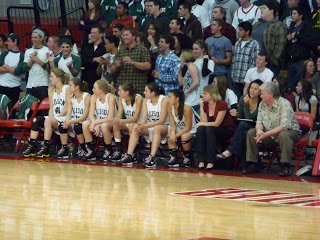 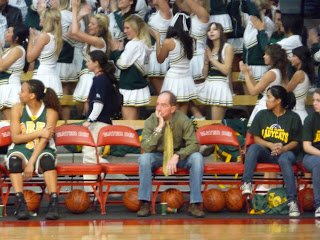 After sending in his second complete set of reserves, Coach Jeff Sink chills in the last few moments of the game.

The game was a blowout, so normally-intense Brea Coach Jeff Sink didn’t need to yell so much. There was no Diet Coke on the scorer’s table for him, no frantic gesturing; just a few yells and a couple intense timeouts. Heck, his wife could have even come to this game.

I was sitting next to a teacher who knows three of the Edison players. He answered my question from last time I was at Mater Dei – he said he was told the cameras in the ceiling are used by coaches to diagram their shots. If that’s true, wow. To have those kinds of resources at your disposal…….. 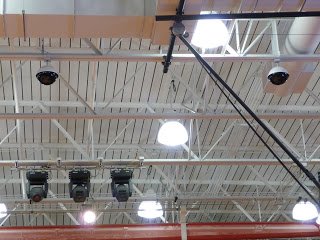 The cameras in the ceiling at Mater Dei. I feel better knowing they’re probably for shot diagramming than some freaky Big Brother security thing. 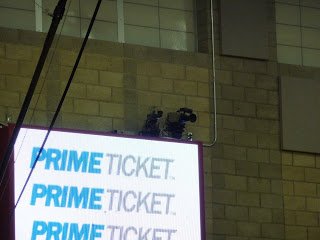 But wait a minute……if the ceiling cameras are for shot diagramming, what are these cameras for?

I don’t know if the security at this game was from Mater Dei, or from the CIF, but they acted like asses. To cap it off, after the game was over, they were trying to herd people out of the gym. The woman in charge of the section I was sitting in was being unecessarily rude about it, using sarcastic and mocking comments to attempt to get people to move (As a high school teacher I can tell you, this is not the way to get people to start walking).

In my younger years I would have said something to her, but last night I just gave her my most withering teacher look. She did a double-take and then looked away before looking at me again. Then she shut up. I swear to god.

On an unrelated note, here is a great video of Friday’s Cajon-Poly game, courtesy of a reader:

Race to the MVP

And then there were 13