“Coach told us we needed an extra spark. I was in the zone and we got it done.” – Erica Tukiainen

At one point in the final minute, my friend and seatmate Daniel said, “this is surreal.” It sure was. Still can’t quite believe it happened, or how it did.

Of course, Bruin guard Darxia Morris was on fire. She looked like she’d just eaten two boxes of Wheaties before the game, the way she was soaring around the court.

Christina Nzekwe was so on point. Coach Nikki Caldwell said the forward was outsized by Cal but was the Bruins’ anchor today, and she is correct. Nzekwe didn’t back down once.

Then there was Tukiainen, who couldn’t miss. I’m really proud of her for getting her career high.

It also was the tenacious Bruin defense. They just played straight up Lady Vol defense on Cal, and it was a beautiful thing.

Daniel said that down the stretch, it was Cal’s inability to convert that probably made the differnce in the game. To be honest, I didn’t have my full analysis cap on today; I’m a little over-basketballed this time of year.

As usual, those of us in the arena knew less than people watching the game on TV. Daniel and I were surprised to see Alexis Gray-Lawson come out on crutches after halftime, and we didn’t know why she was. Turns out it was a “knee sprain,” at least for now. I am praying to the high heavens that it’s not an ACL tear.

Gray-Lawson was very upset at first. She was crying as she went to take her seat at the end of the bench, and one of the assistants sat there and talked to her for a minute (photo below). As the game waned and it was clear Cal was going to lose, Gray-Lawson became upset again. I had my foot in the aisle to go down and give her a tissue and a shoulder pat. I felt so bad for her.

Another thing TV viewers found out was that Bruins Moniquee Alexander and Tierra Henderson were suspended for the game. What the heck is that about? Caldwell has suspended Henderson and Morris before this season. She doesn’t play around.

Two Bears reached their own milestones today, and I congratulate them. Wish I’d have known about it or we would have applauded:

Ashley Walker led Cal with 17 points and 11 rebounds and scored her 2,000th career point when she made a layup with 18:17 remaining in the second half. Walker became the second player in Cal history and the 11th in Pac-10 history to do so.

Devanei Hampton, who finished with 11, reached her own milestone when she scored on a jumper at 7:40 to post her 1,500th career point. Both Hampton and Walker declined to speak with the media following the loss.

Bottom line is it was a great victory for UCLA, but Daniel and I both felt badly for Cal. The Bruins really needed an upset, but it would have been much more fun for ASU or Stanford to go down. Cal is cool. 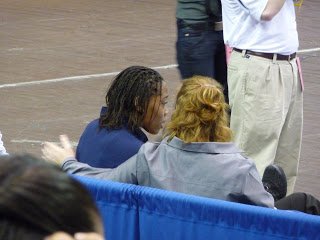 Alexis Gray-Lawson is comforted by a Cal assistant just before the second half. 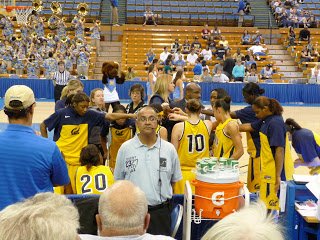 Cal Bears at a timeout. 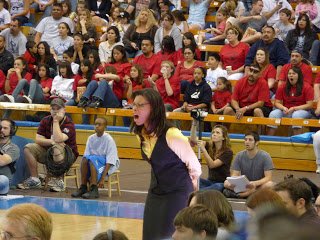 Nikki Caldwell got her hair straightened. She could make a potato sack look good. 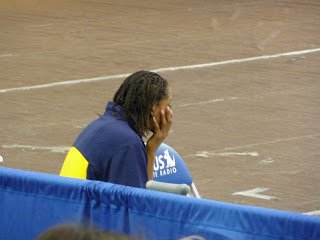 Alexis Gray-Lawson sits alone on the end of the bench, upset. 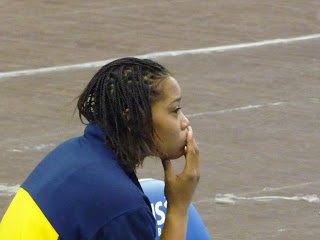 Gray-Lawson watches the last minute of the game. 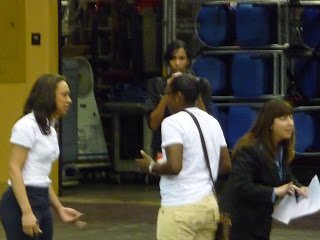 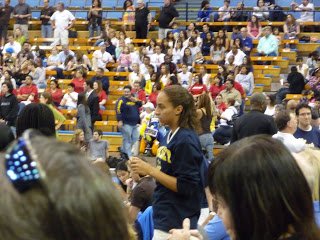 Wings take a defensive stance to close out preaseason with a...

Movement, but no surprises, in this week’s AP top 25 poll

College news takes the spotlight on WNBA’s day off