Canyon Springs held on to win an intense battle for a state playoff berth by defeating highly-touted Santa Monica in a packed gym last night.

Both teams entered the game at 23-6, but it seemed like the heavy Santa Monica crowd was underestimating the Cougars from Moreno Valley, near Riverside.

SM dominated the first quarter with a few tools: excellent ball movement and some great outside shots. They were having trouble finishing on the inside, but their visible tenacity helped them to find other ways to score.

Canyon’s sophomore guard Tear’a Laudermill had the play of the first quarter when, right at the end, she had the ball and was dribbling up the sideline and tripped. She was suddenly on her knees walking and dribbling. Finally she turned and threw the ball backwards to a teammate. There was an audible “oooo” from the crowd. The score was 13-6 SM at the end of the first.

Laudermill got off two quick shots at the beginning of the second to put her team back in it. For the next several minutes, the two teams matched each other for made and missed baskets, and SM remained ahead by two. But right at the end of the period Laudermill hit a big jumper, knotting the two teams 19-19 at the break.

SM came on strong in the third quarter. Junior guard Thea Lemberger – a passionate player who lead her team on the floor – scored a big bucket to put SM ahead 23-19. Then it became the battle of the missed free throws. Both teams were called for fouls, and each squad’s free throw shooters missed both. Tre’shonti Nottingham finally broke it open for Canyon when she stole the ball and went coast to coast with it, and then on the next play hit a jumper to tie the game at 27.

The Cougars went on a run and were up by as much as 31-27 with 1:11 to go. But then ensued the type of hard-hitting play that makes those who know the game say that girls play harder than boys. There were wild ball chases, bodies hitting the floor and desperate passes to teammates from a half-laying position. SM hit one of two free throws at the end to cut Canyon’s lead to 31-30.

Canyon went on a run to start the fourth quarter, making a couple of key steals that each ended up in the hands of junior forward Amber Smith, who put them in. The Cougar crowd was going nuts as SM called a timeout at 4:25, the score 39-34 Canyon.

Then Lemberger hit a couple shots, including a three, which pulled her team even with their opponents. The next several minutes were back-and-forth, one team scoring and the other answering. Both teams continued to miss free throws, which is obviously the weakness of each of these quality squads, and it’s what proved to be the difference down the stretch.

SM turned the ball over on the inbounds pass with 2.8 seconds to go, as Canyon lead 49-48. So they fouled the Cougars, and the player made one of two free throws. But SM didn’t have enough time to inbound the ball and get off a shot, and Lemberger was left with the ball in her hands as the buzzer sounded and the final score glared off the scoreboard.

Lemberger, who had been on the floor, stayed there for a moment as Cougar fans exploded, and when she got up she was crying. SM’s Coach Verdugo walked across the court, folded her up in his arms and guided her to the team huddle.

The lighting in the gym was really horrible, so all my pictures are a bit blurry, but you get the idea from this: 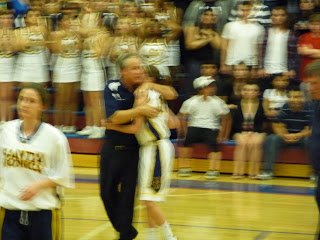 Lemberger and point guard Kristina Johnson were the most impressive players for their team.

On Canyon’s side, Laudermill and sophomore center Sophia Ederaine were the standouts. Ederaine began the game with two big-time blocks, and she proved to be quite a force for her team throughout the contest. Again, the pics were all blurry, but I tried to get a good shot of her because she is one to watch out for if she’s this good as a tenth-grader. 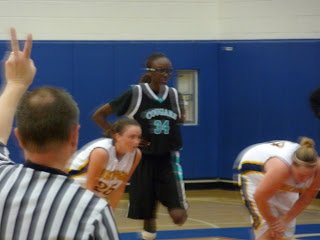 Other shots…….during the game, and SM coaches gather the tearful team at mid-court after the game for one last hands-together. 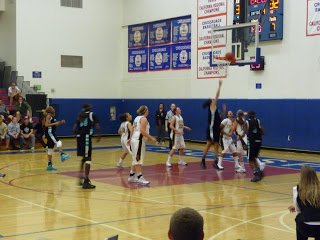 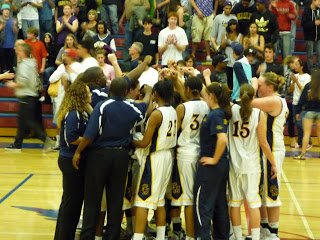 Across town, my partner-in-crime Monique took in the Inglewood-Muir game, and it proved to be a butt-clencher like the game I was at. The greatest point differential was 12-5 in the first quarter, and after that it was neck-and-neck. Inglewood pulled it out, barely.

This is the time of the tourney where it gets good, and the games are closer. But it’s also the rain season. This is the time of year where sometimes, strong girls in basketball uniforms will have tears in their eyes after games, their faces crumpled and flushed.

To all those strong girls in basketball uniforms, keep your heads up.

The oversimplified notion of “just get better”

Two days until the Tournament