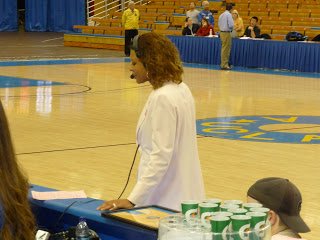 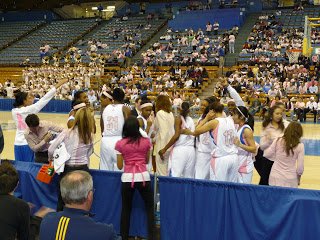 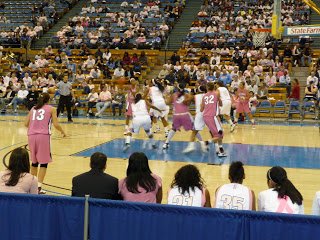 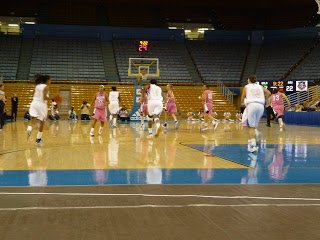 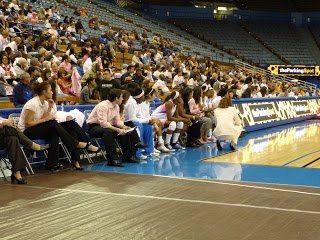 Going backwards through today’s game, from the top: Coach Nikki Caldwell conducts her post-game interview; the team’s energy is high breaking from a timeout in the final minute; there is a lot of pink on the floor on both sides (pictures 2 and 3); UCLA bench in pink.

They tried. They really did. And they almost had them. If Doreena Campbell had hit that second free throw, and if the ref hadn’t made that phony call right afterwards…….but what ifs aren’t worth much.

I liked the energy I saw today on the court. They believe they could do it, and they almost did. With every game, the Bruins get closer and closer to that 40-minute game their coaches want them to have. They’re taking big steps.

Here’s the story off the UCLA site:
Los Angeles, CA – UCLA was edged out in the final minute against Arizona State and fell to the Sun Devils by a 69-66 count. The Bruins had a chance to tie the game with 4.6 seconds left but missed the second of two foul shots. Erica Tukiainen led four Bruins in double-digit scoring with 17 points.
UCLA missed six of its first seven shot attempts in the contest and fell behind 11-2 at the 15:54 mark. The Bruins recovered from the sluggish start and trimmed a 10-point deficit to just three, 20-17 at the 10:04 mark, with an 11-4 run. However, the Sun Devils answered with eight straight points to take a 28-17 lead with 8:32 remaining in the first half. UCLA never got closer than seven points the rest of the half, and ASU took a 37-27 advantage into the locker room at the break. Arizona State scored 19 of its points off of 13 UCLA turnovers. The Sun Devils converted 16 of 25 first-half shots for a 64 percent shooting percentage.ASU senior guard Briann January led all scorers at the half with 10 points, hitting all four of her field goal attempts.
UCLA opened the second half by connecting on three of its first five shots and sliced the ASU lead to 39-36 on a pair of free throws by freshman guard Atonye Nyingifa at the 13:56 mark. Nyingifa scored the Bruins’ last basket of the first half and seven of the UCLA’s first nine second-half points. The Bruins closed to within one-point, 42-41 on a basket and free throw by Tukiainen at the 12:06 mark. The Bruins took their first lead in the contest, 54-53, on a lay-in by junior center Moniquee Alexander with 5:38 to play.
After four lead changes, Tukiainen’s three-point shot made the score 62-61 ASU with 1:57 to play. Sybil Dosty rebounded a January missed three-pointer and layed it in for a 64-61 Sun Devil advantage with 1:38 on the clock. Dymond Simon then made one of two free throws for a 65-61 ASU lead with 57 seconds to play. Alexander’s rebound basket with 42 seconds to play cut the lead to two points. After January was called for an offensive foul, Doreena Campbell drove to the basket for a layup with 29 seconds left on the clock to tie the game at 65. After a pair of free throws by Simon gave the Sun Devils the lead back, Campbell was fouled by Dosty and went to the line with 4.6 seconds remaining to try to force overtime. The Bruin sophomore made the first but missed the second, and ASU’s Becca Tobin grabbed the rebound. UCLA fouled Simon with 0.6 remaining, and Simon drained both foul shots to provide the final margin of victory.
Tukiainen led UCLA with 17 points. Campbell added 15 points with six assists, Nyingifa scored a career-high 13 points with seven rebounds, and Alexander had 10 points on 5-of-6 shooting and five rebounds, all offensive. January scored 21 points for ASU, and Simon joined her in double figures with 19 as the Sun Devils won their school record 11th consecutive game.
“We got back into the game with our defense,” said UCLA head coach Nikki Caldwell. “We did a good job in limiting their opportunities. It was a good team effort to stay in it and get back into the game with potentially the opportunity to go into overtime.”
Saturday’s game was a special breast cancer awareness game. UCLA wore white and pink uniforms, while Arizona State wore pink uniforms for the occasion. UCLA’s jerseys will be auctioned off on UCLABruins.com, with proceeds to be divided between the Kay Yow/WBCA Cancer Fund, the Revlon/UCLA Breast Center and the Iris Cantor-UCLA Women’s Health Education & Resource Center.
Link: http://uclabruins.cstv.com/sports/w-baskbl/recaps/021409aaa.html
It was really something to see so much pink at Pauley Pavilion today, both on the players and in the audience. An interview with Bruin center Moniquee Alexander was played at halftime, where she talked about her mother’s battle with breast cancer and her passing. It was quite moving.
I just wish all of our yelling today could have cheered the coaches, because at least one seemed more upset than the players after they came out of the locker room.
Celebrity sighting: Sparks General Manager Penny Toler, who was sitting in the section across from ours.

News pulling no punches this morning

WNBA says foul on Noelle Quinn shouldn’t have been called

Whalen’s Gophers earn win No. 1 in front of record Williams...

Much going on during a no-game day