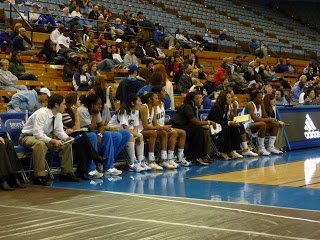 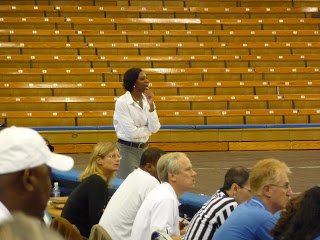 Coach Niya Butts calls out instructions to her Arizona team. 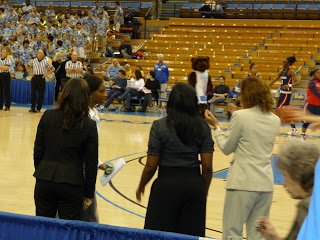 Coach Butts greeted all four UCLA coaches with hugs before the game. 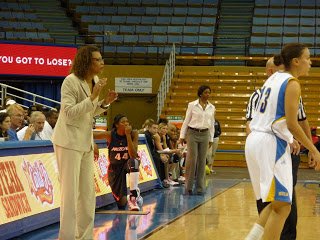 Tennessee vs. Tennessee: Coaches Caldwell and Butts.
I thought I’d do a bit of a pictorial story-teller on last night’s game, rather than the standard game report.
The box score says it all – the only thing poppin’ for the Wildcats last night was Ify Ibekwe and her double-double. I talked to Coach Niya Butts for a moment after the game, and I thought she was being too hard on herself when she said they were “terrible,” but then I saw they only shot 11.5 in the second half. Yikes! I haven’t seen a shooting percentage that low.
Box score link: http://uclabruins.cstv.com/sports/w-baskbl/stats/2008-2009/arizucla.html
Arizona really did look better and more improved. They have better ball movement and run a pretty good defense. But when they get to the rack or try to make a shot, things fall apart. As one of my section mates (also a section mate at Sparks games) said, “things look pretty good until they take a shot.”
For UCLA’s part, Coach Nikki Caldwell seemed pleased during the post-game interview. She acknowledged Erica Tukiainen’s career-high 21 points, and gave credit to freshman Antonye Nyngifa, who has started the last several games and has produced points each time. However, Caldwell said the team “has to get more people involved” in the offensive production.
Consistency seems to be a problem for the Bruins. Doreena Campbell was her usual scoring self, but coming up with a big blank slate was center Moniquee Alexander. Chinyere Ibekwe, Ify’s sister, scored only four points.
Bad news for the Bruins:
Darxia Morris has been suspended indefinitely from the team for violating team rules. Also, Candice Brown’s knee injury has rendered her out for the season.
Other notes:
– There were lots of friends and family in the audience for Los Angeles natives the Ibekwes, and for Arizona guard Reiko Thomas. Former Bruin Noelle Quinn’s young nieces, who frequently attend games, were “guest coaches” on the UCLA bench – and they were pretty happy about it. The girls are also friends with the Ibekwe family.
– That tradition Caldwell instituted where the incoming player brings the player she’s replacing a towel? Arizona does it too. It’s a Tennessee thang, baby.
Next up for the Bruins is ASU tomorrow. It’s also the breast cancer awareness game, so players will be wearing pink. I will have to wear sunglasses.

The great state of women’s basketball in Oregon

Pac-10 preview: the University of Oregon